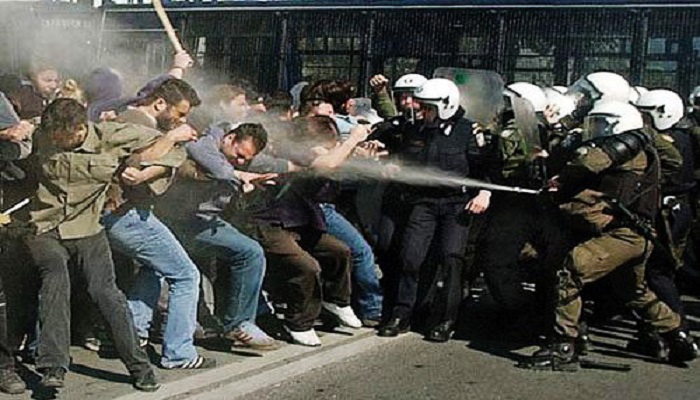 It is an old maxim in military tactics that control of the air or sea are vital in modern warfare because at the end of the day a common foot soldier needs to put their boots on the ground to claim ownership of any territory.

The first use of the phrase extends back to a news article about the Iranian hostage crisis when a U.S. Army general coined it, but it has taken on much more significant meaning 35 years later as it has become a euphemism for the general need to have people in place to exert control over a given situation, be it a marketing stunt, law enforcement or even a public protest.

In the case of the Iran regime, the phrase applies to the tens of thousands of ordinary Iranians working both inside and outside of Iran to change the tyrannous regime of the mullahs who rule Iran with an iron grip; most at great personal risk.

In many ways, Iran is a wartime regime where Basij militia roams the streets looking for dissidents and even women not complying with dress codes; often meting out punishments involving beatings on the street or acid thrown in the faces of women.

Iran invests heavily in cyber warfare capabilities that it turns onto its own citizens snooping on their surfing habits and directing militia to arrest those involved in frowned upon activities. Its’ monitoring and control of all media hearkens back to the template some of the most dictatorial regimes in history have used to control their populations.

Nowhere is that fear more clearly on display than the relentless pursuit of anyone connected to the National Council of Resistance of Iran, one of the largest Iranian dissident groups in the world. It was the NCRI which has previously revealed the existence of secret nuclear facilities the regime was hiding, even as it publicly professed it had no such facilities. But more irksome to Iran’s mullahs is the fact that Iranians would be willing to publicly criticize their society as brutal and repressive even as they work feverishly to try and portray themselves as moderate and loving.

That fear of NCRI has manifested itself into orchestrating blatant attacks on Camp Ashraf and Camp Liberty in Iraq where NCRI supporters have lived in refugee camps. These attacks by Iraqi security forces under the direction of Iranian military and intelligence services have resulted in the brutal murders of scores of unarmed men and women, with several others kidnapped whose whereabouts still remain a mystery somewhere amongst Iran’s string of prisons.

Iran’s mullahs know and understand that one of their greatest weaknesses has been the inability to silence these critics who shine a light on their secrets. It is also why they have empowered their lobbying machine, most notably the National Iranian American Council and scores of blogs it controls, to continually attacks NCRI in an attempt to discredit its work.

But the tide has changed significantly the last few years as scores of U.S. elected officials and representatives from European Union nations have joined with non-governmental groups in recognizing the valuable work being done by the NCRI, as well as the importance and value of having people on the ground in Iran who can expose the regime and help continue building the network of resistance from within.

While not as publicized as an Army division landing on a beach, their work has been just as vital in laying the ground work for freedom and democracy in Iran.