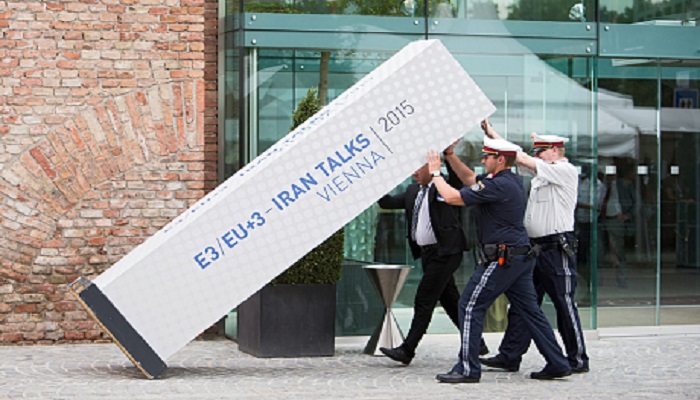 The end of talks in Vienna

The National Iranian American Council lobbies on behalf of the Iranian regime. That much has been well documented through financial records, emails, court judgements, interviews, public statements and investigative stories by journalists.  The NIAC has even formalized that lobbying in launching an official lobbying arm in the form of NIAC Action.

The question remains though, will anyone on Capitol Hill listen to them?

There are a plethora of reasons why very few Senators or Representatives and their staffers will listen to them, especially in the wake of the current agreement between the regime and the P5+1 group of nations that the Congress will begin a 60 day review period.

First and foremost, any lobby’s power on Capitol Hill is derived from a few simple levers of influence such as: financial muscle to make campaign contributions, grassroots muscle to deliver workers in the field to walk precincts or man phone banks or direct influence through relationships and knowledge.

There are abundant examples of this every day. The National Rifle Association has been effective in holding off gun control legislation because it has over four million members shelling out over $200 million to support largely conservative candidates in favor of its position, while the AFL-CIO labor unions boast over 11 million members and spent over $46 million in direct lobbying alone to influence largely liberal candidates.

Every industry and cause in America has a powerful lobby, as well as foreign governments, including ones like the Iranian regime, but federal law prohibits Iran from directly contributing to candidates or even speaking to them directly on legislation; hence the need to create the NIAC to carry the mullahs’ water.

NIAC has an annual budget of less than $2 million with expenses around $1 million, which puts its financial clout somewhere around spotted owl society. The NIAC has recently posted a job for a development director since its leader, Trita Parsi, has quickly deduced he needs more cash quickly in order to get on the radar screen of Congress.

Consequently, if its political action committee were to even make a donation to a candidate, it is reasonable to assume that candidate might decline such as gift since it would be inviting intense scrutiny and attack from anti-regime opponents who would be more than happy to point out the error of a candidate’s ways in taking money from a group directly associated with Tehran.

It would be akin to taking money from BP right after the Gulf oil spill or donations from Monsanto while you’re reviewing regulations on GMOs.

Then there is the question of NIAC’s grassroots muscle, which has proven to be spotty at best and non-existent otherwise. Several “Days of Action” legislative outreach days have yielded pitiful results with small numbers of petitions being delivered primarily to already supportive members’ offices. NIAC is staffed with only a small number of people who attempt to demonstrate their outsized significance largely through social media that speaks to their own sphere of supporters.

Even media coverage of NIAC has seen a steep decline where their comments have moved lower and lower in news stories and been largely relegated to cheerleading quotes for the Iranian regime, much like a parrot would copy a master’s remarks. Absent articles about ongoing nuclear talks and their media presence shrinks to the size of a thimble.

As for their influence with their expertise, even that has come under harsh criticism as news media disclosures about former staffers and interns for NIAC moving into critical policy making roles within the Obama administration while reviewing policy on current nuclear talks have forced legislative staff to keep them at arm’s length lest their bosses be tagged with the same accusations.

In fact, Tyler Cullis of NIAC recently sent an email blast to congressional offices arguing for the lifting of the United Nations embargo on conventional weapons trade with Iran in order to facilitate the agreement; particularly since this has become one of the loopholes of the agreement. Since everyone knows that if the world gives them unrestricted access to arms they can buy and export to their proxies waging war in Syria, Yemen and Iraq.

The fact that Cullis is not even a staffer for the new lobbying arm, but engaging in direct lobbying of congressional staffers, caused many eyebrows to be raised, but the desperate gambit by NIAC was necessary because Iran was demanding the action at the 11th hour.

To give you an idea of how desperate NIAC staffers are to help the mullahs, Reza Marashi claimed on CBS This Morning that the deal was “too big to fail” and thus had to be approved.

The last time we had something given to the American people as too big to fail, it was our nation’s banks as they gorged on bad debt and collapsed sending the nation spiraling into recession.

This Iranian “too big to fail moment” might end up sending the rest of the world into a new nuclear arms race and prolonged sectarian wars for years to come at the hands of the mullahs.

All of which is why at the end of the day, it would be wise for Democrats and Republicans to just ignore the NIAC.