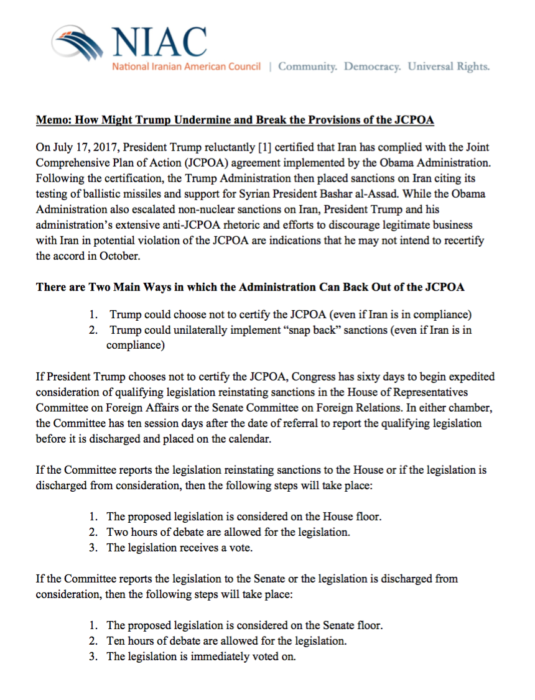 Why Does the Iran Lobby Care About the Nuke Deal?

The Iran lobby, including the National Iranian American Council and other groups, invested heavily in supporting the Iran nuclear deal. They lobbied for it, wrote editorials, sent out loads of press releases, made appearances on news programs, held meetings with elected officials and coordinated strategy with the Obama White House through countless meetings.

The Iran lobby ostensibly was doing all this in the name of peace and in support of a whole host of promised positives coming from its passage, including:

It was a nice idea and attractive to many in Congress. Unfortunately, like most good intentions, it fell flat on its face when confronted by the evil nature inherent within the ruling mullahs in Tehran.

The one thing everyone seemed to forget and the Iran lobby was careful to obscure was that the Iranian regime never really cared about a nuclear deal since the mullahs knew it would never halt their nuclear program, only postpone it slightly.

What they and their Iran lobbyist allies really cared about was the lifting of crippling sanctions that, more than anything else, was and still is the true goal of the regime and its allies.

Preserving the nuclear deal is not the real concern of the regime. It is the potential for the re-imposition of economic sanctions under a skeptical Trump administration and a reset back to 2012 in which the Iranian regime was on the verge of collapse and widespread dissatisfaction among the Iranian people still simmered from the violent crackdown on the 2009 democracy protests.

This is why the deal was crafted to preserve Iranian regime’s missile program and never take up the issues of human rights and terrorism since the mullahs had always planned to use the cash it received from the nuclear deal to jumpstart their ballistic missile program and keep the Assad regime afloat in Syria.

The mullahs and by extension the Iran lobby relied on the passiveness of the U.S. under Obama. As British politician Edmund Burke once famously said: “The only thing necessary for the triumph of evil is for good men to do nothing.”

In this, the Iran lobby sought to dissuade action against Iran by promising a changed regime, but since none of that has happened and the situation throughout the Middle East has clearly gotten worse under the expansion of several proxy wars by Iran, the Iran lobby has shifted its tone and tactics to a much darker and fear-based message.

It now relies on the banging of war fears in trying to keep the nuclear deal alive as evidenced by the mounting PR push by groups such as the NIAC which put out a policy memo outlining how the Trump administration could undermine the nuclear agreement.

It is typically long-winded and rests its logic on the notion that President Trump can kill the Joint Comprehensive Plan of Action (JCPOA) agreement by choosing not to certify the JCPOA or implementing “snap back” sanctions.

The NIAC memo then goes on to exhaustively explain the various steps the Congress would take in reviewing either action by the president.

What the NIAC does not discuss is the fact the Congress voted to pass new sanctions on Iran by stunningly huge bipartisan majorities that made clear no one actually believes in any of the promises made by the NIAC earlier.

Iranian regime has clearly become a threat not only to the U.S., but to the entire region as its ballistic missiles can now reach targets throughout Europe, Asia and Africa.

The NIAC briefing also glaringly misses the essential point of what is happening now which is the Iranian regime’s actions on human rights violations, sponsorship of terror and accelerating a missile program that will soon surpass North Korea is what is driving the debate about Iran; not the nuclear agreement.

But the NIAC hopes that focus on the JCPOA will deflect attention on these other areas where Iranian regime is so blatantly awful on right now. It is akin to pointing at the crack den and ignoring the building on fire right next to it.

You can see how the Iran lobby is trying to push issues such as terrorism and missiles off the front pages by talking about the nuclear deal, when the nuclear deal isn’t even the issue being debated by Congress and the Trump administration.

This is the “new” grand lie of the Iran lobby and its supporters. They hope that by focusing on the JCPOA and Iranian regime’s continued “compliance” with the agreement that mullahs’ regime in Iran is somehow still a good global citizen. The lobby never addresses the ballistic missile program or the threat it poses, especially with heightened concerns over North Korea. It also never deals with the horrific human rights violations Iranian regime and its IRGC has perpetuated in the Syrian conflict.

Unfortunately for the NIAC and other Iran lobby members, everyone has pretty much caught on to the lie and ignoring what they say which explains the overwhelming bipartisan push to target Iran.

For the NIAC, it quickly finds itself alone in Washington’s Beltway with few open supporters and even less leverage in trying to boost Iranian regime’s fortunes. It’s time for the NIAC to pack it in.