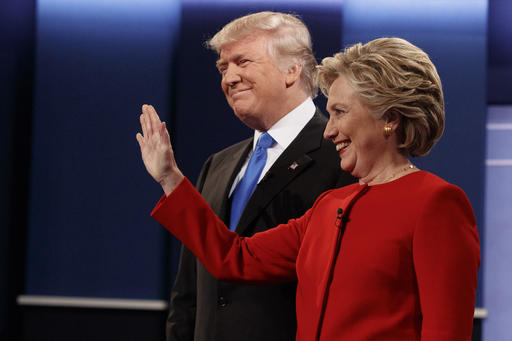 The first debate between Hillary Clinton and Donald Trump was billed as literally the fight of the century; bigger than Ali vs. Frazier, bigger than Coke vs. Pepsi. While an innumerable number of columnists, analysts, lobbyists and anyone else with “-sts” at the end of their job description will critique this debate to death, we should be asking a question that didn’t come up in the debate.

Why does the Iran lobby want to make the issue of Iran a partisan political issue?

From the moment the Iran lobby was created, especially the launch of its principal leader—the National Iranian American Council—it has sought to wedge itself into the partisan political environment by trying to align itself with Democrats and attacking Republicans for the past several years.

At first it may have been because Republicans were the most visibly opposed to accommodating the mullahs in Tehran, but the NIAC even held its fire when it came to criticizing prominent Democrats opposed to Iran accommodation such as Sen. Robert Menendez (D-NJ), a prominent critic of the Iranian regime.

It was also no coincidence that many of NIAC’s staffers formerly worked for Democratic office holders and organizations, but that is a superficial reason for its efforts to politicize Iran issues.

The blueprint for this tactic comes from the mullahs themselves as displayed in their energetic efforts to tar and feather Saudi Arabia and portray its chief regional rival as the source of all terrorism and evil in the world. It’s a blatant effort at diverting attention away from Iran’s own failings and blunt criticism for its long support for terrorism and brutal human rights record.

If you treat any criticism of the Iranian regime as merely political point scoring, the NIAC and other supporters are hoping it diminishes the power and effectiveness of the criticism. The only problem with that argument is when both Democrats and Republicans both take aim at the regime anyway.

In stark contrast to that cynical tactic, Iranian dissident and opposition groups such as the National Council of Resistance of Iran have worked diligently to build bridges on both sides of the political aisle and worked on unifying themes such as human rights, support for women and opposition to sponsorship of terrorism.

Ultimately the Iran lobby must pursue this diversion strategy since its typical message points about Iranian cooperation and moderation have dissolved in a flurry of aggressive, militant and shocking moves by the mullahs since the nuclear deal was sealed and the “echo chamber” of support was revealed by the news media.

With the news coming out of Iran since the passage of the nuclear deal being mostly bad and only getting worse, the Iran lobby finds itself in a pickle with the upcoming presidential election promising a new president who plans to hold the Iranian regime much more accountable whoever wins.

For the Iranian regime, the pressure is on to grab as much as it can before that happens so the news coming out of Tehran is fast and furious. In the last day alone, we have seen:

The turmoil the Iranian regime is facing highlights the schisms that are running through Iranian society and the deepening split between the mullahs and the Iranian people. It also explains why the Iran lobby is so intent on trying to portray Iran policy issues as partisan political ones and not worthy of the attention of media.

Unfortunately for the Iran lobby, the American people, who have been subjected to near constant attacks inspired by extremist Islamists and worry about the growing carnage around the Middle East caused by Iranian regime’s active support of three proxy wars, have begun to suspect any supporter of the mullahs.

This may explain why the only people in America openly supporting the Iranian regime are those directly connected to the Iran lobby such as the NIAC, Ploughshares Fund and their cohorts.