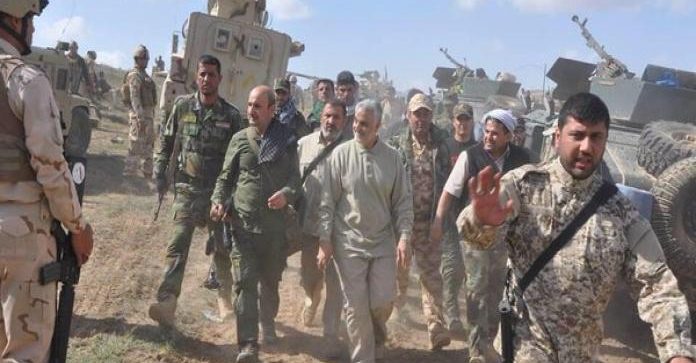 Why Iran Role in Syria Should be a Warning for Iraq

The Syrian civil war could have turned out much differently. With the advent of Arab spring democracy protests sweeping through the region in 2011, Syria was rocked by nationwide protests against the regime of Bashar al-Assad, which responded with violent crackdowns spawning armed conflict.

It quickly degenerated into sectarian conflict as Assad’s Alawite-dominated government forces joined with other Shia groups to fight against predominantly Sunni-led rebel groups. Those groups included non-sectarian groups backed by the West that gained significant wins against the Assad regime, threatening his rule.

In response, the mullahs in Tehran directed their Hezbollah terrorist proxy to join the fighting in 2013 in an effort to save Assad, who was a crucial ally to the Iranian regime. Coupled with indiscriminate bombings on civilians by the Assad regime with barrel bombs and the wholesale destruction of villages, the war quickly escalated into a humanitarian disaster and laid the ground for the birth of radicalized extremist groups such as ISIS which broke away from Al-Qaeda elements that had originally been given sanctuary in Iran after being forced out of Afghanistan by the U.S.-led invasion.

By September 2015, Iran entreated Russia to enter the conflict to rescue the Assad regime after Iranian-led forces faced defeat on the battlefield and losses mounted. The situation grew so dire for the mullahs that they forced the enlistment of thousands of Afghan refugees living in Iran to join the fight as mercenaries.

During this escalation, the Iran lobby led a PR campaign to hide the truth of the Iranian regime’s involvement and attempted to distance it from the nuclear agreement being negotiated at the same time. It was crucial for the Iran lobby to keep the issues separate even though the evidence was mounting of how deep the Iranian regime’s involvement in Syria.

At the same time, the Iranian regime increased its efforts in Yemen and Iraq. First by stirring up the Houthis and arming them and inciting them to rebellion aimed squarely at Saudi Arabia’s doorstep in an effort to distract the kingdom from confronting Iran’s expansionist aims in Syria and Iraq.

But it is in Iraq where the battle is shifting as Iran applies lessons learned in Syria to mounting a new effort to exert greater control over Iraq.

Iran has fought to maintain control in Iraq. During the administration of former prime minister Nouri al-Maliki, the mullahs in Tehran forced out Sunni partners and split the Iraqi government in an effort to gain absolute control, which backfired when ISIS attacked from Syria and took over Mosul and much of northern Iraq. The push into Iraq threatened Iran and the Maliki government fell as the debacle caused consternation among Iraqis with ire aimed directly at Iran.

Now Iranian regime is attempting to manipulate and control the battlefield in Iraq, much in the same way it tried to control what was happening in Syria. Iraq’s abrupt departure from the war against the Islamic State group, which its priority was above all else the liberation of Iraq’s second-largest city, Mosul, shows the influence of Iranian regime at work. Iran has reportedly been pressuring Iraqi government for weeks, if not months, to prioritize Fallujah.

Tehran has more influence on Iraq’s focus, whether on Fallujah or anywhere else, than Moscow, Washington and Ankara combined, says a former U.S. combat commander with extensive experience working with Iraq’s senior leaders.

Paul D. Shinkman, senior national security writer for U.S. News, pointed out the threat Iran poses to the future of Iraq as it purposely seeks to create a destabilized situation to better influence the Iraqi government in the absence of a U.S. presence.

Other forces are also at play behind the decision, including influences from Tehran that would like the Shiite majority in Iraq’s government to protect Baghdad from what it sees as the threat posed by the proximity of Sunni extremists, like the Islamic State group, while also solidifying its hold on power, Shinkman writes.

“Iran does not see a government of Iraq that has a Sunni presence in it,” says Scott Mann, who retired as a lieutenant colonel after 18 years as a U.S. Army Special Forces officer with deployments to Iraq and Afghanistan. “This is a way to further divide those ethnicities, between Persians and Arabs, and between Sunni and Shiite, and create a more polarized environment around that conflict.

It’s the same formula Iran pursued in Syria and is attempting to replicate in Iraq by purging the government of any Sunni influence and use sectarian conflict as the excuse to wage war, rather than allow a coalition government of Sunni and Shia work together for the benefit of Iraq.

General Qassem Soleimani, commander of the Quds Force, the special operations branch of Iran’s Revolutionary Guards, met with leaders of the Iraqi coalition of Shi’ite militias known as the Popular Mobilization Forces, the most extremist forces in Iraq that have been massacring, burning alive innocent Sunnis in any area they have overtaken in the past few years.

Sunni politicians in Iraq condemned the involvement of Soleimani and other Iranian advisers in the battlefield preparations, saying it could fuel sectarian tension and unleash a new round of Sunni-Shi’ite bloodletting. They also cast doubt on the Iraqi government’s assurances that the offensive is purely an Iraqi-led effort to defeat Islamic State. “Soleimani’s presence is cause for concern,” said an Iraqi member of parliament from Falluja. “He is absolutely not welcome in the area.”

The threat of Iraq turning into an Iranian vassal state has alarmed Arab nations throughout the region and rightly so. What is even more alarming are news reports that Iraqi forces were assisting Iran in the construction of permanent military bases within Iraq’s Kurdistan region.

Last week, Arabic and Turkish media reported that Tehran had launched construction of the largest missile base in the Syrian Coastal Mountain Range in Iraqi Kurdistan, which reportedly aims to protect the religious borders of Iran.

If true, the news would only add to the powder keg Iranian regime is creating and potentially turn the Iraq-Turkey border into another Syria.

The international community needs to re-engage in Iraq and not allow the Iranian regime a free hand. All of which reiterates the fact that Iran mullahs are not part of the solution to any crisis in the region. They are indeed the source of the problem.