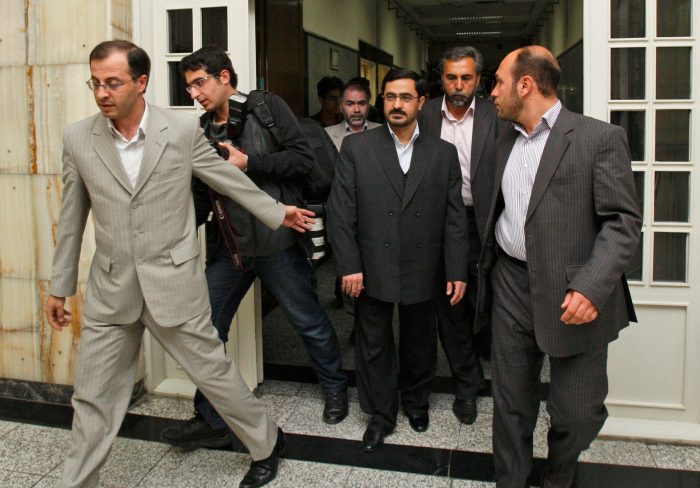 Why is the Iran Lobby Obsessed with Sanctions?

For an organization that considers itself an activist group fighting for the rights of Iranian-Americans, you would think the National Iranian American Council would be hard at work trying to build grassroots support for the release of Iranian-American hostages.

Maybe Trita Parsi, head of the NIAC, might offer a blistering editorial attacking the regime’s policies of not recognizing dual nationalities?

Maybe Reza Marashi or Tyler Cullis could take a break from giving interviews demanding a lifting of economic sanctions and instead question what else could be done to help get these Iranian-Americans released?

The stark reality is that the NIAC and its members cannot even be bothered to send out tweets, let alone press releases in support of these captive Iranian-Americans, nor try to persuade the Iranian regime to let go of such a damaging and harmful policy that puts countless Iranian-Americans at risk who travel back to Iran to visit relatives.

Instead, the most pressing priority for the Iran lobby—judging by the volume of press releases, statements, editorials, tweets, interviews and speeches—is the lifting of all economic sanctions against the Iranian regime, including all of those not included in the nuclear agreement and were originally imposed because of Iranian regime’s support of terrorism and abysmal human rights record.

The arguments being made by the Iran lobby, especially the NIAC, for lifting of economic sanctions still in place, such as restrictions on Iran’s use of US currency exchanges, resemble the kind of twisted pretzel logic you might find from an extremist that claims to be helping people as he beats them with a club.

One recent example is an editorial by Marashi on the self-publishing blog TopTopic (probably because no self-respecting mainstream publication could print it with a straight face), in which he makes the silly argument that the US is not in compliance with the noxious nuclear deal and is purposely dragging its feet because:

It is an utterly inane position to advocate since it ignores the most basic and unavoidable truth about the Iranian regime which is compelling most Americans and their leaders to be remain wary of the mullahs in Tehran: the Iranian regime is simultaneously engaged in three wars, while grabbing dual citizens and trying them in secret courts, all during a human rights crackdown that abuses women, religious minorities, children and even gays.

About the only thing most Americans can agree on in this divided political season is that Iran should be restrained, not encouraged.

The sight of pallets full of cash delivered on midnight flights to buy the release of Americans left a sour taste that is hard to forget. The sight of American sailors made to kneel under the guns of Iranian Revolutionary Guard Corps soldiers was unforgettable.

The sight of Iranians hanged publicly almost on a daily basis, including women and children as young as 15 when convicted horrifies most Americans.

And yet, the Iran lobby does not tackle any of these issues. Instead, it focuses on trying to get the mullahs more cash. One might think NIAC’s fundraising budget is dependent on earning commissions for every billion raised for Iran’s coffers.

The fact that the Iran lobby ignores the almost daily pronouncements proving the regime’s true intentions demonstrates clearly it has no regard for the enormous human suffering being caused by the Iranian regime.

Take for example statements made by Salar Abnoush, deputy coordinator of Iran’s Khatam-al-Anbia Garrison, an IRGC command front, who was quoted as saying in an Iranian state-controlled publication closely tied to the IRGC that is sending assets to infiltrate the United States and Europe at the direction of Iran’s top mullah Ali Khamenei.

The IRGC “will be in the U.S. and Europe very soon,” according to Abnoush, who said that these forces would operate with the goal of bolstering Iran’s hardline regime and thwarting potential plots against the Islamic Republic.

“The whole world should know that the IRGC will be in the U.S. and Europe very soon,” he said.

According to Fox News, the military leader’s comments come as Iran is spending great amounts of money to upgrade its military hardware and bolster its presence throughout the Middle East and beyond. Iran intends to spend billions to purchase U.S.-made planes that are likely to be converted for use in its air force.

Given these developments, it’s easier to understand the rationale for NIAC’s emphasis on lifting sanctions and it’s not about the poor Americans being held in Iranian prisons.

It’s about cash for Iran, plain and simple.

Not even the sham punishment of 135 lashes given to Saeed Mortazavi, former head of the regime’s Social Security, because of accusations of widespread financial violations and irregularities could cover from his past record as a former prosecutor who was responsible for the mass killings of detainees and political dissidents following the infamous 2009 protests over the stolen presidential election.

It seems in Tehran, you get punished for ripping off your fellow regime leaders, but not for killing innocent protestors.

Too bad the NIAC didn’t have anything to say about it.