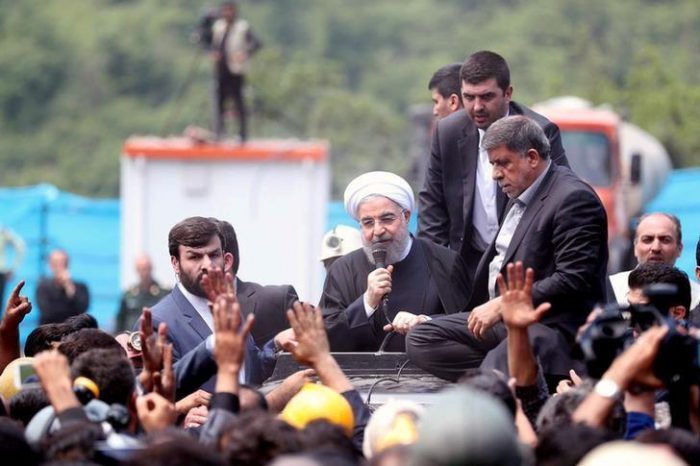 What ‘s the line? Same stuff, different day? That’s accurate when it comes to describing the so-called “presidential election” scheduled for May 19th. Elections in Iran are neither fair nor free and because of their illegitimacy, they invariably result in further weakening the already embattled regime; like a cancer eating away at a patient.

The most common fallacy being trumpeted around about how the regime government works, especially by Iran lobby advocates such as the National Iranian American Council, is that Iranian elections are democratic.

Nothing could be further from the truth.

When elections are held, all candidates are vigorously vetted by the Guardian Council, a body of 12 clerics, six of whom are appointed directly and the other six indirectly by top mullah Ali Khamenei. When the president is selected, he is nothing more than a puppet, acting according to the will of the supreme leader. Based on the Islamic state’s constitution, the president must be confirmed by the supreme leader no matter what the people voted.

It’s the kind of absolute control that campaign managers in Western nations must envy. Democracy can be such a messy experience that the mullahs in Tehran have done away with the inconvenience.

The idea that “moderates” are going to be empowered is silly when you consider that Khamenei, has final veto power over foreign policy, treaties, military commitments, economic policy, the judiciary and culture. These are enforced through state mechanisms appointed by him including the Revolutionary Guards and Quds Force (which owns over two-thirds of the industrial capacity of the economy through shell companies), Basji paramilitaries and morality police that enforce, arrest and imprison anyone violating generic sharia laws designed to stamp out dissent.

And all candidates, including the incumbent Hassan Rouhani and leading pro-Khamenei camp loyalist Ebrahim Raisi, are in line with all the regime’s strategic objectives. Otherwise, their candidacy would not enjoy Khamenei’s necessary approval.

The citizens of Iran are defined as people without rights or voice. Their choices in the upcoming elections can’t get any worse:

The lengths that the Iran regime will go to keep its grip on power may be shown in the grisly April 29th assassination of exiled Iran TV executive Saeed Karimian in Istanbul.

Saeed Karimian, born in Tehran, the manager and owner of GEM TV group, was assassinated along with a Kuwaiti business partner while in his car after he was sentenced in absentia for “spreading propaganda.”

The regime claimed that Karimian had close relations with the Iranian opposition; going so far as to photoshop an image showing Karimian meeting with Iranian opposition leader Maryam Rajavi.  Karimian had strongly denied such reports in the past, but all Iranians know that linking anyone to the PMOI/MEK is tantamount to an undeclared execution order.

The killing of Karimian is indicative of the new paranoia gripping the theocratic regime; the ruling mullahs are now looking like they are in their death throes. After eight years of appeasement by the Obama administration, the plethora of human rights violations within Iran has increased. More than 3,000 people have been executed since the “so-called” moderate Hassan Rouhani took office as president in 2013.

It would not be surprising that the mullahs anticipate another uprising, similar to what occurred following the fraudulent second election of Mahmoud Ahmadinejad in 2009. With this presidential election, they are terrified that the people of Iran will once again take to the streets to protest the oppression and corruption that have been the modality of the Iranian regime since the 1979 revolution.

Nevertheless, whether Rouhani or Raisi becomes president, one thing is clear: the April 29 assassination in Istanbul and political discontent among the populace is a political signal indicating where the Iranian theocracy is heading after the elections.

The only solution for the people of Iran is to seek change from within. This can be achieved by supporting opposition groups such as National Council of Resistance of Iran, which is largest opposition against Tehran.  This coalition enjoys the most support among Iranians inside the country and abroad, as seen vividly in its annual 100,000-strong rallies, where supporters gather in Paris from all four corners of the globe.