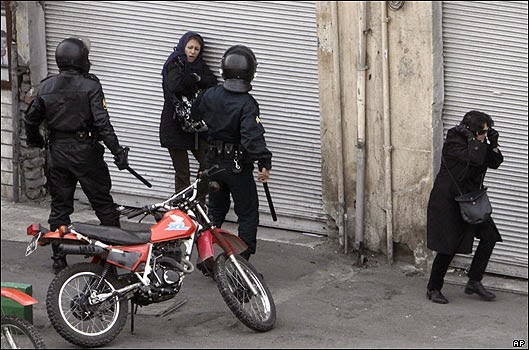 Why Oppression Leads to Terrorism by Iranian Regime

The saying goes there is a thin line between love and hate. The same could be said for the space dividing oppression and terrorism. One usually begets the other. In the case of the Iranian regime, the widespread oppression of the Iranian people is treated in an almost cavalier manner by the mullahs and sets the stage for even worse atrocities to be committed.

Psychologists call escalating behavior patterns “gateways” that enable someone to move from one point of view to another and see them in the same light. Just as a drug abuser might start off with alcohol before moving onto prescription drugs and eventually heroin addiction, the mullahs operate in the same pattern.

When the regime deems it “morally” necessary to beat a woman in the street for violating dress codes, it is not a stretch to imprison that same woman for spreading sedition by posting selfies on Instagram. From that point, it’s a pretty simple leap to executing her for high treason for liking a post by a protestor on Twitter.

This goes a long way to explaining why the mullahs see any opposition to their rule as a catastrophic threat to their power. The mullahs—backed by the muscle of the Revolutionary Guard Corps—operate essentially on a fear basis.

The existence of any organized opposition that survives outside of the mullahs’ control is dangerous to them because it plants the seeds in the minds of Iranians that they can pursue a life outside of fear, in peace, democracy and freedom.

The creative freedom artists express or the veracity that journalists employ are just examples of the threats posed to the mullahs’ rule, which explains why they are often the most heavily targeted individuals for oppression. The mullahs often make no distinction either if you are even a citizen of Iran, arresting and imprisoning notable foreign journalists such as Jason Rezaian of the Washington Post to silence what they perceive as negative opinion.

The core of the Iranian resistance movement resides in long time dissident groups such as the People’s Mujahedin Organization of Iran and its umbrella group, the National Council of Resistance of Iran.

For the mullahs, the mere existence of these groups is a bitter pill and they have worked to dismiss, discount and even eradicate their existence.

The regime’s intelligence services engage in a cyber war that includes the creation of outlandish fake websites branding opponents as evil doers. They regularly flood the news media and social media channels with disparaging commentary. They supply and direct the Iran lobby and affiliated groups to attack and demean opposition groups.

And in the case of Camp Liberty in Iraq which houses thousands of these dissidents, the Iranian regime regularly directs Shiite militias to attack it with rockets, mortars and gun battles as recently as this week.

Here is where the regime makes the transition to terrorism when it sees violence as its only means of statecraft and diplomacy. The maximum example of that is the Syrian civil war in which over 600,000 Syrians have been killed and half of the nation’s population has been displaced and become refugees.

As Shahriar Kia, a press spokesman for residents of Camp Liberty, put it in The Hill:

“Iraq is yet another canvas where Iran’s fingerprints are witnessed ever more as the international community continues to unfortunately neglect this very dangerous flashpoint corner of the globe. Iran-crafted and sponsored Shiite militia groups are once again accused by international human rights organizations of pursuing systematic and sectarian killings and human rights violations targeting the minority Sunni community in the recent campaign to retake the city of Fallujah, west of Baghdad, from Daesh (the Arabic acronym for the self-proclaimed Islamic State, ISIS or ISIL),” he said. “This ultimately further marginalizes and alienates the Sunnis, and further pushes them into adopting extremist methods and welcoming radical groups.”

The weekend, the NCRI held its annual gathering outside of Paris and made the case for a peaceful, democratic transition in Iran away from the rule of the mullahs.

The NCRI and opposition groups such as the PMOI offer a viable alternative for the Iranian people to make a choice. Unfortunately the mullahs have consistently rigged the elections to never even allow a true opposition candidate to appear on the ballot for fear if they let one in, it will become a flood demanding change.

Sir David Arness, a member of the British Parliament, said in a recent edition of Forbes:

“The NCRI had advocated for real-world solutions in order for the international community to help the Iranian people achieve this goal, solutions that include heightened economic sanctions on the theocratic leaders and those responsible for human rights abuses in Iran, a recognition of Iran’s human rights record and violent foreign policy, along with approaches vis-à-vis the nuclear program that are more well adapted to an Iran that has time and again deceived the international community,” he said.

It is high time the international community recognize the link between oppression and terrorism and hold Iran accountable for both.