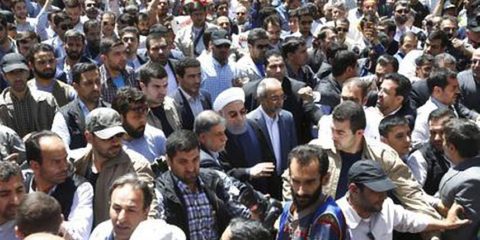 Why Regime Change in Iran is Gaining Momentum

Regime change is a phrase that sends the Iranian regime’s mullahs into an apoplectic rage. One can imagine spittle flying and foaming mouths as they chew on the idea of their regime ending and being replaced by a secular democratic government.

Unlike the Obama administration which viewed appeasing the mullahs as a viable foreign policy position, the Trump administration is skeptical of the mullahs and tempered by seeing what Iran has accomplished over the past eight years under that appeasement policy.

Some supporters of the president are now openly floating the idea of toppling the Iranian regime’s leadership as a policy initiative.

Supporters of dislodging Iran’s iron-fisted clerical leadership say it’s the only way to halt Tehran’s dangerous behavior, from its pursuit of nuclear weapons to its sponsorship of terrorism, according to Politico.

“The policy of the United States should be regime change in Iran,” said Sen. Tom Cotton (R-Ark.), who speaks regularly with White House officials about foreign policy. “I don’t see how anyone can say America can be safe as long as you have in power a theocratic despotism,” he added.

Secretary of State Rex Tillerson appeared to endorse subverting the Iranian regime during recent testimony about the State Department’s budget when Rep. Ted Poe (R-Texas) asked the diplomat whether the Trump administration supports “a philosophy of regime change” in Iran.

Noting that Trump’s Iran policy is still under review, Tillerson said the U.S. would work with Iranian opposition groups toward the “peaceful transition of that government.”

The case for political subversion in Iran has also been pressed to the White House by the Foundation for the Defense of Democracies, a Washington think tank strenuously opposed to Obama’s 2015 nuclear deal with Tehran.

Soon after Trump’s inauguration, FDD’s CEO, Mark Dubowitz, submitted a seven-page Iran policy memo to Trump’s National Security Council. The memo — which was circulated inside the Trump White House and recently obtained by POLITICO — included a discussion of ways to foment popular unrest with the goal of establishing a “free and democratic” Iran.

“Iran is susceptible to a strategy of coerced democratization because it lacks popular support and relies on fear to sustain its power,” the memo argued. “The very structure of the regime invites instability, crisis and possibly collapse.”

Another administration voice forcefully speaking out against Iran is CIA Director Mike Pompeo who said on Saturday that Iran is not only the world’s top terrorism sponsor, but it’s support has also grown over the last several years, according to the Daily Caller.

The Islamic state’s influence across the Middle East “has expanded considerably ” in the last six or seven years, said Pompeo during an interview with MSNBC. This influence and support of terrorism makes Iran a threat to national security, he added.

“Whether it’s the influence they have over the government in Baghdad, whether it’s the increasing strength of Hezbollah and Lebanon, their work alongside the Houthis in Iran, the Iraqi Shias that are fighting along now the border in Syria — certainly the Shia forces that are engaged in Syria. Iran is everywhere throughout the Middle East,” said Pompeo.

Because of this malign influence, Iran is playing an increasingly “destructive role” in the region, according to the director.

The NCRI identified 42 independent missile centers involved in the production, testing and launching of missiles, in a report published on June 20. Some of these bear the hallmarks of Iran’s nuclear comrade, North Korea.

The report identifies 15 sites related to missile manufacturing. Many of these sites have several factories churning out weapons components.

The effort to expand its missile capabilities are just part and parcel of the Iranian regime’s efforts to push its influence across the region in an effort to stave off growing discontent at home.