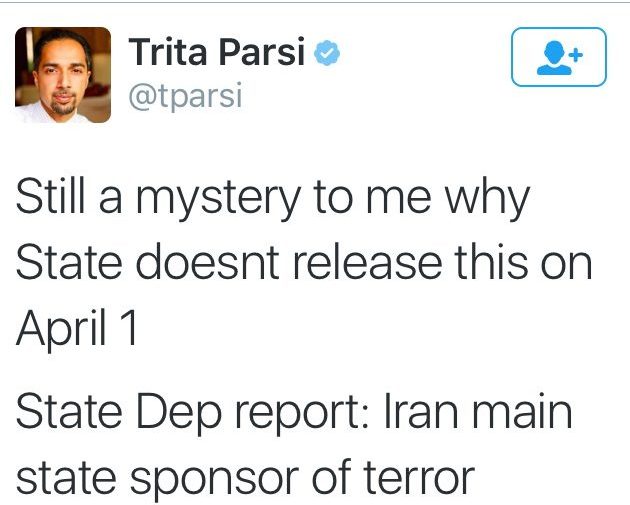 Why the Iran Lobby Avoids Discussing Human Rights and Terrorism

In a world where it is common place knowledge that the Iranian regime is a state sponsor of terrorism, with a long and bloody history, it always seems that the Iran lobby operates in a different plane of existence.

For regime supporters such as Trita Parsi of the National Iranian American Council and Joseph Cirincione of the Ploughshares Fund, issues such as human rights violations and terrorism are less than inconvenient truths about Iran; they are things never meant to be spoken of in public or on social media.

The Iran lobby consistently seems to operate on the premise that if you never mention either of these topics, then they must not be real.

This is obvious by simply perusing the blogs and social media feeds for these Iran support groups periodically. Reading them within the context of what is happening in real time in the Middle East and Iran provides a surreal view that is totally disconnected from reality.

Take for example this nugget in which Parsi derides the U.S. State Department’s annual terrorism report in which it identifies Iran as a leading state sponsor of terrorism:

“Still a mystery to me why State doesnt release this on April 1,” he tweets, implying that the report is a joke better left for an April Fools prank.

Unfortunately for Parsi and the rest of the Iran lobby, mockery and ridicule can’t hide the facts laid out in the report in which the State Department spells out the Iranian regime’s longstanding support for Hezbollah, a key cog in the regime’s long-running involvement in the Syrian civil war, and its support for Shiite militias in Iraq that have roamed throughout Sunni areas as death squads and Houthi rebels in Yemen that have displaced nearly half of the country’s population as part of a civil war.

Parsi’s Twitter feed is absent any mentions of those Iran-backed wars and the role the mullahs and the regime’s Quds Forces and Revolutionary Guard Corps play in them. He does make mention of the plight of Syrian refugees fleeing the war and the high price they pay in trying to cross the Mediterranean, but never urges Iran to seek a peaceful resolution of the conflict or even open its borders to those refugees it is forcing out.

Parsi does however spend considerable social media time attacking Saudi Arabia, the Iranian regime’s biggest rival, accusing it of “terrorism” and acts more readily identified with the mullahs in Tehran.

He even goes to the absurd level of defending top mullah Ali Khamenei’s incendiary speech over the weekend in which he denounced the U.S. and called Great Britain “evil” and blamed his country’s continued economic woes on existing U.S. sanctions on Iran’s access to U.S. currency markets tied to human rights violations and not the nuclear deal from last year.

“Khamenei said today what Iran’s been signaling the US for a while: Anti-ISIS cooperation on hold due to sanctions relief problems,” Parsi tweets.

The implication Parsi tries to make is that continued sanctions against Iran for the mass executions of over 2,500 Iranian men, women and children, as well as its sponsorship of three major wars is somehow halting the war against ISIS.

He conveniently ignores the bulk of Khamenei speech which is filled with vitriol and hate and the usual threats to wipe Iran’s enemies off the face of the Earth.

The more appropriate evaluation to make of Parsi social media postings and those his colleagues at NIAC is that they spend more time posting about Donald Trump than they do about the misery being suffered by Iranians at the hands of their own government.

They spend more time posting about the Cannes Film Festival than they do about the threats being made by the creation of a new morality police force designed to enforce strict Islamic codes against Iranian women.

They spend more time discussing the plight of Siamak Namazi, an Iranian-American arrested and imprisoned in Iran who is a long-time supporter of the NIAC, than the thousands of Iranian dissidents, journalists, artists, bloggers and activists that were rounded up, imprisoned and tortured leading up to parliamentary elections.

The priorities of the Iran lobby are always on display to anyone who wishes to scan through the social feeds of supporters such as Parsi. What is telling is what is NOT in those feeds, such as any criticism of the mullahs, any calls for a Syrian cease fire, any demands for a release of all Iranian journalists or dissidents, any urging for the end of the barbaric practice of public hangings of prisoners, or any hopes for a cessation of the practice of beating women who do not wear hijabs.

Parsi and his cohorts do not do any of these things because they are – above all else – committed to supporting the Iranian regime and keeping it safe from any threats.