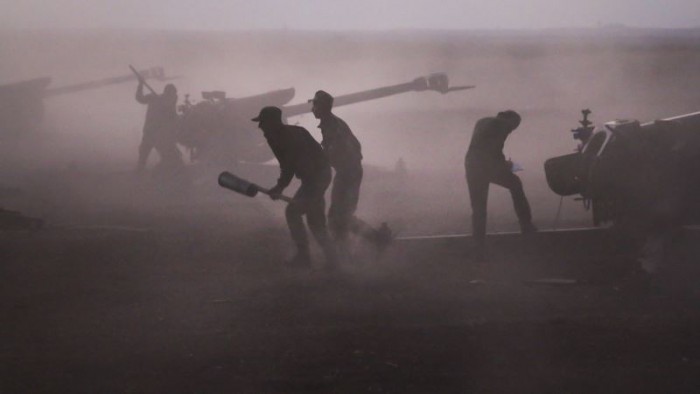 Why the Iran Lobby is Silent on Syria

During the long and contentious negotiations for a nuclear deal between the Iran regime and the P5+1 group of nations, the Iran lobby – led by the National Iranian American Council – was loud and boisterous in its efforts to prop up the regime’s arguments, denounce opponents and defend it as an instrument for positive change.

Trita Parsi, head of the NIAC, led the way with a steady stream of media interviews, editorials and even becoming a near permanent fixture in the hotel bars and lobbies in Austria and Switzerland during negotiations.

Parsi argued that the nuclear agreement would open the door to new solutions in Syria, writing that “the Iranians can help first to secure local cease-fires, and then later to begin a political process.”

“Once the nuclear deal has been sorted out, the door will be open for greater U.S.-Iran engagement,” he added.

Facts on the ground in Syria have proven Parsi to be wrong, if not an outright dissembler of the truth since in the wake of the nuclear agreement, the Iran regime launched a series of new offensives using thousands of fresh troops and forged an alliance with Russia to launch an air campaign that has targeted rebels to the Assad regime, not the ISIS strongholds it claims are its targets.

Ironically, last September, when Hassan Rouhani addressed the United Nations General Assembly, Parsi “compared the U.S. airstrikes in Syria to another country identifying terrorists in Oklahoma and bombing them without approval from the American government.”

We can only assume that Russian bombardment of Syrian civilians at the behest of Iran’s mullahs is more akin to being bombed by your own government with its blessing according to Parsi’s twisted logic.

The closest Parsi has come to biting the hand that feeds him was in a Huffington Post piece on Pope Francis’ visit to America where he writes “there are few signs that Tehran is decisively scaling back its support for the Syrian government and the Russians have recently moved in militarily to boost the Assad side. The end result of this inevitably will be more deaths and more stalemate. No side can escape responsibility for these dire consequences.”

“What has fueled the Syrian crises more than anything else is the false illusion on all sides that a decisive military victory is around the corner,” he added.

Parsi fails to cite that the reason why the Assad regime has been able to stay in power in the face of a peaceful and popular revolt against his rule which later turned bloody and brutal at his hands was the unquestioned and loyal support of the Iran regime.

Rather than advocate for the peaceful regime change in Syria that other nations embraced as part of the Arab Spring – most notably Tunisia which earned the Nobel Peace Prize this year for its peaceful transition to democracy – Parsi has opted to be an unabashed supporter and apologist for Tehran’s military support of Assad and excuses such support as “understandable.”

The example set by the Tunisian National Dialogue Quartet’s Nobel win has recharged democracy activists around the region and bolsters hope for the long-suffering members of the Iranian resistance who have peacefully opposed the mullahs in Tehran only to be arrested, imprisoned, tortured and often executed by the regime for simply protesting for basic human rights.

It is tragic, but altogether understandable that Parsi and the rest of the NIAC staff have never raised their voices in protest over the brutal suppression aimed at the members of the Iranian resistance, which is viewed harshly by the mullahs because of the simple fact the ordinary Iranians are living examples of the opposition to their rule and proof that their government is illegitimate.

Parsi’s contention of a more moderate pathway to regional stability through Tehran has been increasingly taken to task as more commentators see the proof in Iran’s recent actions and increased militarism.

“If the past is any guide, highly ideological regimes — see China, Vietnam, the former Soviet Union and Cuba — have proven adept at opening up economically but still retaining authoritarian and repressive control,” said Aaron David Miller, vice president at the Woodrow Wilson Center for Scholars in an editorial in the Wall Street Journal.

“Anyone who thinks Iran is on a linear course to moderation ought to lay down until the feeling passes,” Miller said.

Similarly, Jennifer Rubin writing in the Washington Post echoed the same thoughts as she praised Sen. Bob Menendez (D-NJ) for being right on Iran’s post-agreement rise in aggression.

“Sen. Robert Menendez, stalwart critic of the Iran deal, deserves to say ‘I told you so.’ He had suggested that sanctions would be lifted even without revealing the possible military dimensions of Iran’s program, that the inspection process (including self-selected samples) was nonsensical and that we would embolden Iran in the region to, among other things, further boost characters like Bashar al-Assad. Right on all counts,” Rubin writes.

As more thoughtful people recognize the folly of the arguments used by the Iran lobby in defending an indefensible agreement, the people of Syrian are reaping the punishment for allowing the mullahs of Iran a free hand in prosecuting their religious war.