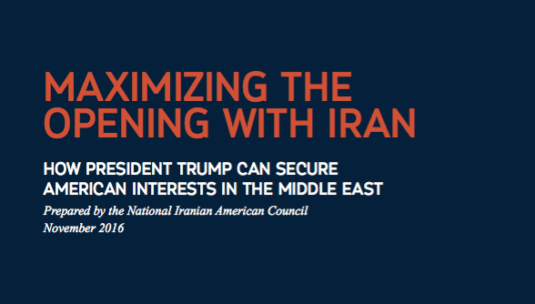 Why the NIAC Has Lost All Credibility

The National Iranian American Council has gotten virtually nothing correct over the last three years when it comes to predicting the behavior and actions of the Iranian regime.

That in and of itself should not be too surprising since in its role as a chief advocate and lobbying force for the Iranian regime, its responsibility is not to journalistic fact, but to lobbyist advocacy. That fact alone should make any journalist talking to them or reading their publications slightly skeptical from the outset.

Also, it is erroneous to consider the NIAC a “human rights” organization when its stated mission goal of helping Iranian-Americans is plainly shown to be ignored at best and duplicitous at worst since the NIAC does not mount media or grassroots efforts on behalf of imprisoned Iranian-Americans in Iran. Nor does the NIAC ever join with mainstream human rights groups such as Amnesty International in pressing the Iranian government to release these American hostages.

While the NIAC takes out full page ads in the New York Times touting the moderation of the Iranian regime, it does not similarly take out full page ads critical of Hassan Rouhani’s public statements in which he reaffirms the regime’s policy of not recognizing dual citizenship; the only nation on the planet to do so.

The NIAC promised Iranian moderation in light of a new nuclear agreement, but in the 18 months since, Iran has embarked on what is arguably the widest range of war, insurrection and human rights abuses spanning four countries including Syria, Iraq and Yemen.

At home it has defeated, removed and imprisoned virtually all political opponents. It has resorted to mass arrests of students, journalists, artists, bloggers and anyone else showing any inkling of rebellion to the mullahs.

It has conscripted Afghan refugees to fight and die as mercenaries in Syria, while it brought Russia into the conflict resulting in the mass bombing of civilians, hospitals and reduced Aleppo to a pile of dust.

All of these things NIAC promised would not happen, yet it has all come to pass.

Now the NIAC has issued a 45 page “report” of recommendations to the incoming Trump administration on how to secure American interests in the Middle East.

While mildly entertaining as a work of fiction, the Trump transition team would be wise to consider using this report to wrap up food leftovers since that is all it is good for.

This document is nothing more than a retread of the same tired and now proven false assumptions the NIAC has been peddling now for the past decade. It loses all credibility for one basic omission: It never acknowledges nor criticizes Iran’s role in the escalation of tensions and bloodshed in the Middle East.

That’s like blaming the weather for a mass murderer on the loose.

If one understands that the NIAC is an Iranian regime advocate and not a human rights organization, it is easy to understand the priorities it places on its discussion topics in the document.

It places the nuclear agreement and the U.S. alliance with Saudi Arabia as its two more important topics, which coincidentally are the two most pressing concerns for the Iranian regime.

It then dives into Iraq and Syria, the two principle battlefields Iran is involved with in creating its Shiite sphere of influence. Oddly, the report does not mention Yemen or the rise of Islamic militants in sub-Saharan Africa which are now responsible for instability stretching from Egypt to Nigeria to Yemen.

Lastly, the report devotes a scant three pages to human rights and only from the perspective that Washington can only improve human rights by essentially trusting the Iranian regime to do the right thing if Washington caves in and appeases the mullahs fully.

The one thing the report does say is that the Trump administration “should heed the advice of Iranians themselves.” On this point, NIAC is correct, but not in whom it believes are the right Iranians to listen to.

The Trump administration needs to part ways from failed policies of the Obama administration and muzzle the “echo chamber” of Iranian lobbying it created. It needs to chart its own pathway and listen to the concerns, thoughts and advice of Iranian dissidents and opponents both within Iran and outside.

Let the Iranian people counsel on what are the best approaches to bringing back a secular, democratic government in Iran. That kind of advice is not likely to come from the NIAC, Ploughshares Fund or similar Iranian lobbyists.

It will come from opponents such as the National Council of Resistance of Iran, Amnesty International and outspoken leaders on the human rights situation in Iran such as Rudy Giuliani and Sen. Robert Menendez (D-NJ).

The most amusing part of the NIAC report is the claim that was signed by 76 “national security experts” but a closer review of those names and titles reveals that:

The overwhelming number of these so-called “experts” is in reality advocates and lobbyists for the Iranian regime or commercial interests tied to the Iranian regime such as Bijan Khajehpour, managing partner of Atieh International which works to line up foreign businesses with Iranian-state industries.

Mainstream media outlets would do well to finally stop quoting these sources that are as accurate as pollsters on election night.