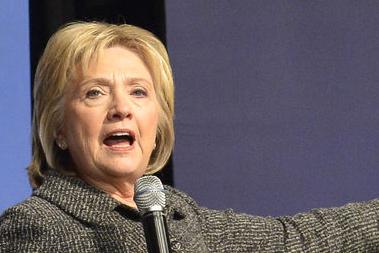 WikiLeaks Reveals a Much Tougher Hillary Clinton on Iran Regime

The Iran Lobby, led by the National Iranian American Council, have often publicly argued for a more moderate approach to the Iranian regime and encouraged efforts by the Obama administration to appease the mullahs in Tehran in the hopes of changing their historically extremist behavior and policies.

The past two years have shown how foolish it was to believe those promises as the Iranian regime is now the central player in three wars raging across Syria, Iraq and Yemen; all conflicts in which the world is increasingly being dragged into the crosshairs of a shooting war.

The Obama administration has called for another increase in US forces in Iraq to combat ISIS insurgents, yet now find that Iraqi militias it trained are now fighting in Syria against rebel forces the US supports.

Now in Yemen the US Navy is exchanging missile fire with Iranian-backed Houthi rebels. Not exactly a recipe for “moderation.”

The NIAC and other Iran lobbyist members have gone all in with the Democratic Party in backing their candidates for House and Senate races in the hopes of overturning a Republican majority that is skeptical of Iran’s professed moderate intentions, but that hope might prove just as illusory as the idea of Iranian moderation.

WikiLeaks has been dumping thousands of emails and documents from the Democratic National Committee, party officials and members of the Clinton campaign, including from Hillary Clinton itself.

What they reveal is a much different picture of the candidate’s opinions on Iran that what the NIAC would have everyone believe.

According to a speech transcript made public this weekend by WikiLeaks, Clinton on October 28, 2013, told the Jewish United Fund of Metropolitan Chicago: “I believe that Rouhani was allowed to be elected by the two major power sources in Iran, the supreme leader and the clerics and the Revolutionary Guard … in part because the sanctions were having a quite damaging effect on the economy.”

She continued: “I don’t think anyone should have any illusions as to the motives of the Iranian leadership. What they really want to do is get sanction relief and give as little as possible for that sanction relief.”

According to Eli Lake in Bloomberg, Clinton, in private at least, has taken a more realistic view since leaving the administration. In her Chicago speech, she called Rouhani’s outreach to the West a “charm offensive,” and argued that U.S. negotiations were important as a sign of good faith to the international community, but not as a way to influence Iranian internal politics.

In another speech sure to dismay NIAC and other Iranian supporters, Clinton even advocated privately for U.S.-led strikes against Iranian regime nuclear facilities and acknowledged regime’s ability to terrorize the United States through Iranian regime’s Revolutionary Guard Corps (IRGC) operatives and other proxies in Latin and North America.

Clinton expressed a willingness to bomb the Iranian regime facilities as an “option” to prevent the Shiite powerhouse from developing a nuclear weapon in a June 4, 2013 speech to Goldman Sachs and elaborated further about the threat Iranian regime, the IRGC, and its proxies pose to the United States in a separate speech on October 24, 2013.

She warned that there would be “consequences” carried out through the IRGC and Iranian regime’s other proxies if the United States took military action against it. Although she did not specifically mention Hezbollah by name, it is the most active Iranian mullah’s terror proxy across the world, including the Western Hemisphere.

In a bit of prescience, Clinton reiterated:  “So it’s a wicked problem, as we like to say, because Iran is not only troubling because of its nuclear program, although that’s the foremost threat, it’s the primary conductor and exporter of terrorism.”

“I mean, if you had a big map here behind us, literally from North America to Southeast Asia, there are so many thoughts, so many bombs, so many arrests that are all traced back to the Iranian regime’s revolutionary guard, and their constant efforts to sell (inaudible)….So even if a miracle were to happen and we came up with a verifiable nuclear deal, there would still be problems that Iran is projecting and causing around the world that had real consequences for our friends and ourselves.”

Her recognition of the Iranian regime’s true nature is a welcome boost to those that have opposed the entreaties of NIAC and other Iranian regime supporters. It is also understandable that her comments were private since they were at odds with her party’s leader in President Obama, but with her possible election as president, her core beliefs that the Iranian regime is not a huggable, fluffy teddy bear, but rather a central conduit for the exporting of death, destruction and terrorism is heartening to regime opponents and Iranian dissidents.

On another accout, the Iranian regime blasted comments made by Secretary of State John Kerry who blamed Iran’s provocative actions in Syria and Yemen as being the creator of uncertainty to the extent foreign banks and businesses are reluctant to invest in Iran and not US sanctions on currency exchanges.

“We are surprised. During the nuclear negotiations, we clearly said that questions of security, defense, ballistic missiles and our regional policies were not negotiable and are not linked to the nuclear talks,” he said.

“It is unacceptable that Mr. Kerry is today talking of new conditions.”

No matter how the regime wants to spin it, these problems are problems of its own creation.