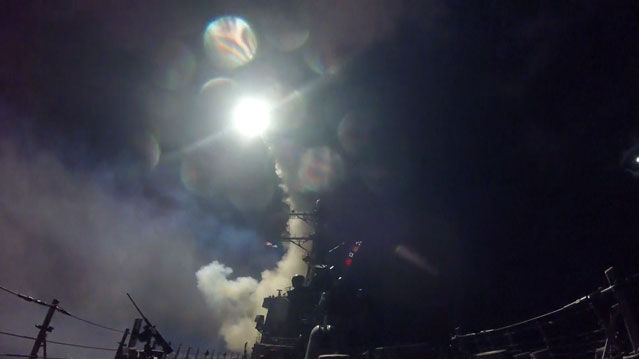 With the launching of 59 Tomahawk cruise missiles from two U.S. Navy warships aimed at a Syrian airbase last week, the Trump administration took an enormous step in reversing the policies of appeasement and accommodation that marked the Obama administration’s approach to Middle East conflicts.

The airstrike was done in response to a chemical weapons attack in which at least 87 people were killed – including women and children – in the assault on the Syrian town of Khan Shaykhun last Tuesday. Medical personnel on the ground indicated the chemical agent was sarin, a nerve agent so deadly that mere drops inhaled or absorbed on skin kill within minutes.

U.S. military personnel allegedly tracked the aircraft launched from the airbase in question and took a flight path to the town, dropping its ordinance and returning.

These incidents demonstrate clearly the utter failure of the Obama administration’s past policies that sought to broker agreements with regimes that have no intention of abiding by them; be it Syria with chemical weapons or Iran with its nuclear program.

As the New York Post editorial board pointed out in a scathing piece pointing out that administration’s failures and more importantly what it means for the nuclear agreement with the Iranian regime.

Last week’s horrific attack in Syria disproved the Obama administration’s boast of stripping Bashar al-Assad of “100 percent” of his chemical weapons. And that has big implications for the nuclear deal with Iran. After all, the nuke deal relies on the same kind of verification and accountability system entailed in the agreement with Assad, the Post said.

“We will, for the first time, be in a position to verify all of [Iran’s] commitments,” President Barack Obama said at the time, insisting the deal had at least temporarily halted Tehran’s pursuit of nuclear weapons.

Critics insist it did no such thing. Just as many refused to believe Team Obama’s claim that it had fully rid Syria of its weapons of mass destruction. The Syria accord allowed Obama to save face for failing to enforce his “red line” against Assad’s use of chems after the dictator got caught using sarin nerve gas to kill up to 1,500 Syrian civilians, the Post added.

Just this past January, former National Security Adviser Susan Rice insisted, “We were able to get the Syrian government to voluntarily and verifiably give up its chemical weapons stockpile” in a way “that the use of force would never have accomplished.”

The Post summed up by saying “Just how wrong they all were has now become dead obvious. So why should anyone still believe the same team’s assurances on Iran’s ability to produce nukes?”

While the strike by the Trump administration didn’t do much tactical damage to the airbase since American officials warned the Russians of the pending attack, who then promptly tipped off their Syrian allies who quickly moved most of their assets out of harm’s way, the attack was a major strategic masterstroke by President Trump.

The attack was the first by the U.S. against Syrian regime assets and crosses the “red line” that President Obama had previously laid down the first time the Assad regime used chemical weapons, only to infamously balk at crossing its own line.

The airfield bombed is significant, because it is also used by members of Islamic Revolutionary Guard Corps (IRGC) and the Quds Force, according to a report from Asharq Al-Awsat Arabic language website. The field has been used for a long time by IRGC to operate not only in Syria but also in Iraq.

It also neatly puts the Iranian regime on notice that the conditions of the conflict have shifted dramatically. The U.S. was willing to take unilateral military action without U.N. approval or consultation with regional partners in response to a clear and present danger.

For Bashar al-Assad and Hassan Rouhani, the prospect of a surprising and swift U.S. response must have come as a shock.

Of course that did not stop Iran from doubling down on its bets on a murderous Assad regime.

Iranian regime rallied around the Syrian strongman and pledged to respond to US “aggression” after the Trump administration bombed a military airfield in retaliation for a poisonous gas attack.

Assad has drawn heavily on foreign Shi’ite militias sponsored by Iran, led by Lebanon’s Hezbollah group, for his most important gains since the Russian intervention.

In Iran, Supreme Leader Ayatollah Ali Khamenei said the U.S. missile strike was a “a strategic error, and a repeat of the mistakes of the past,” the state news agency IRNA reported.

“The Islamic Republic has shown that … it does not back off and its people and officials … do not retreat in the face of threats,” said Khamenei.

Many Syrians opposed to Assad’s rule consider Lebanon’s Hezbollah and Iranian-backed troops as occupiers seeking to drive out mainly Sunni Syrians from the areas they live in. They hold Iran and its allies responsible for the displacement of millions outside the country, according to Reuters.

Allies including the United Kingdom and Australia Friday, applauded Trump’s decision to launch the strike.