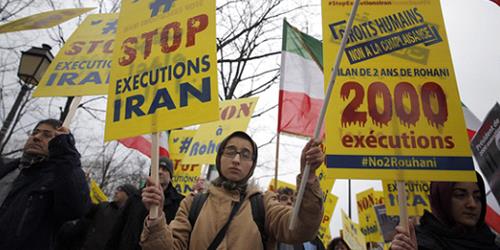 “You cannot escape the responsibility of tomorrow by evading it today.” – Abraham Lincoln

On this President’s Day, it is fitting we look back on past presidents for lessons and observations that hold true in today’s chaotic world and Lincoln’s quote is as powerful and meaningful today as it was in his day, especially as we look at the downward spiral that is the Middle East in general and the Iranian regime specifically.

Lincoln, faced with a great split down the middle of his country, believed deeply in uniting a nation under the principles of freedom and equality for all. He saw slavery as a morally corrupt practice that – if allowed to continue – would darken and sicken the heart of his nation to its core. His quote hearkens to the need to stand firm in the face of great adversity and make the hard decisions today because any delay would force ever harder decisions tomorrow.

The same sentiment applies to the world’s approach to the mullahs in Tehran. The rush to appease the Iranian regime with a dubious nuclear agreement and the move to delink from it a wide range of regime abuses such as support for terror, development of ballistic missiles, holding of hostages and crackdowns on human rights, have proven to be problematic in its aftermath.

Lincoln’s words are also a necessary reminder that we cannot bargain away important moral points today in the hopes for political expediency and we certainly cannot be lured by the siren song of false promises that emanate from the Iran lobby which fought hard to position the regime as a moderate-seeking group of bureaucrats and not a bunch of thuggish theocrats which they really are.

When regime advocates such as Trita Parsi and Reza Marashi of the National Iranian American Council argue for an almost obsequious approach to dealing with the mullahs in the hopes of gaining favor, they in fact are arguing the world give away all of its leverage in the hope of gaining some whiff of cooperation when none will be forthcoming.

Even now, Parsi and Marashi and others in the Iran lobby have consistently ignored the broader implications of aggressive regime behavior since the nuclear deal and instead focused on non-issues such as visa waivers and holding the line against any possible future sanctions.

They have ignored the widespread imprisonment of journalists, Iranian dissidents, artists, students and bloggers throughout Iran.

They have ignored the dramatic escalation in the Syrian war as the mullahs begged Russia to enter on behalf of saving the Assad regime.

They have ignored the blatant acts of aggression committed by the regime in detaining ten U.S. sailors and then using them in a constant stream of propaganda exercises; releasing video of them kneeling underneath guns, even one sailor crying and now revelations they were subjected to constant and intense questioning by regime officials.

The Iran lobby has consistently ignored the repeated reports and demands of international human rights groups such as Amnesty International and Ahmed Shaheed, the United Nations Special Rapporteur for human rights in Iran, all of whom have revealed evidence of mounting regime abuses of increasing size and barbarity.

An Iranian who fled the bloodshed of the regime wrote in the American Thinker his own story of the atrocities committed by the regime and sad state of affairs for ordinary Iranians.

“In the last 37 years, the Iranian nation has lived under the reign of the most backward regime.  The truth is that the clergymen who rule Iran do not belong in this age and cannot deal with the realities of the modern world.  At best, the Islamic revolution of 1979 was the revolution of century against century.  They believe that after 37 years of mismanagement and brutality, the only way they can extend their rule is by increasingly terrorizing their critics.  The Islamic regime has taken this noble Iranian nation into the Middle Ages, creating some of the most medieval laws and implementing them against its citizens in the most vicious manner,” he writes.

“The regime’s atrocities include stoning men and women, cutting off their fingers, torturing innocent people for their opinion, incarcerating religious minorities on fabricated charges, imprisoning Iranian youths for upholding their very basic human rights, and organizing vigilantes to murder political opponents.  They have created an atmosphere of fear and intimidation, where Iranians cannot trust one another.  In brief, in the name of religion, the clergymen have created a society where sadness and despair have replaced hope and optimism,” he added.

This testimony is only one of many that pour out of Iran demanding to be addressed by the world’s governments and news media. Iranian dissident groups such as the National Council of Resistance of Iran have provided much of the proof of the atrocities being committed through smuggled video of public executions, sworn testimony from victims of the regime and tracking of prisoners who all too often disappear in the labyrinth of infamous black holes such as Evin Prison.

Ultimately, Lincoln’s message may prove prophetic as the price to be paid in confronting Iranian regime aggression will only rise in the next president’s term. We can only hope that price will not be too high to pay in light of recent appeasement of the mullahs.