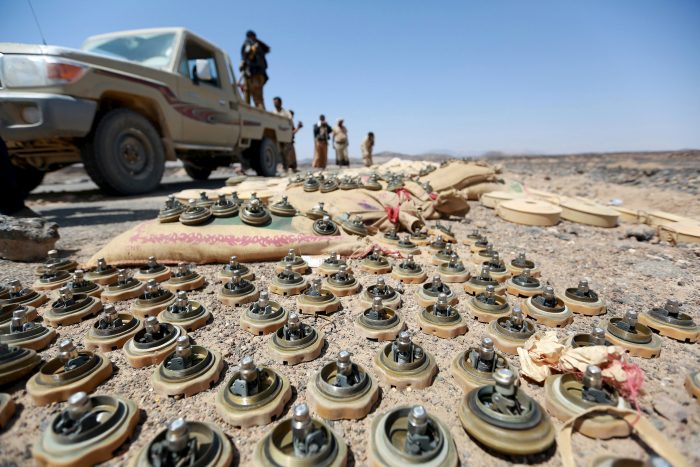 Soldiers loyal to Yemen’s government stand next to mines planted by the al-Houthi group in locations where they controlled in frontline in the province of Marib, October 4, 2015. REUTERS/Stringer TPX IMAGES OF THE DAY

Next May Iran will hold a presidential “election” that will lack for one thing: suspense. In the Iranian regime, uncertainty is anathema to the mullahs, especially Ali Khamenei and his handpicked minions on the various parliamentary councils that review and decide which candidates will appear on the ballot.

For all the handwringing and angst being generated by the Iran lobby over the perceived vulnerability of current president Hassan Rouhani, there is no doubt that if Khamenei wants Rouhani back to carry out his policies, he’s going to be the next president.

Given that certainty, the domestic situation for the ruling mullahs is anything but favorable to them. The Iranian economy remains stuck in reverse. Any hopes for it to be jumpstarted by the billions of dollars released as part of the nuclear agreement evaporated as the mullahs chose to redirect those funds to support the teetering Assad regime in Syria and the war in Yemen, as well as go on a multi-billion dollar buying binge of Russia weapons.

Unemployment remains high, especially among Iranian youth, coupled with rising prices for everything from fuel to consumer goods. Add that to miserable environmental conditions that have resulted in long droughts that have devastated farming and turned vast stretches of Iran into desert, and you get massive street protests—not about politics, but about economic conditions.

The mullahs are not fools, they are crafty political hands, adept at deception and misdirection, and they have dredged up another diversion in constantly pitting Iran in perpetual cycles of war and foreign policy crisis.

If it wasn’t the Syrian civil war, it was the rebellion in Yemen. If it wasn’t the sectarian conflict in Iraq, it was the decades-long civil war in Lebanon. Throughout all of it, the mullahs have used foreign policy to divert attention from the misery at home and gin up a jingoistic fervor.

Now as Iran stares at another presidential election, the mullahs don’t want a repeat of 2009 where massive street protests were violently put down in response to cries of a rigged election.

This explains why Rouhani has made a trek to Moscow to call upon Russia to serve as a guarantor of sorts for Iranian regime’s interests in Syria. Rouhani is dangling the prospect of forming a mutual barrier to U.S. policy interests in the Middle East, as well as the tempting offer of access to Iranian bases for Russian military forces.

Iran’s foreign minister Javad Zarif reopened the door to Russian use of Iranian airbases to carry out strikes in Syria, in another sign of increasing cooperation between the two countries, according to the Daily Caller.

Russia carried out some airstrikes on Syria from an Iranian airbase in August, but was later rebuked by Iranian authorities for bragging about it. After Russian state media trumpeted the strike as a major strategic coup, Iran’s minister of defense accused them of a “betrayal of trust” publicly. He declared at the time, “it is finished, for now.”

Zarif signaled that this time-out may be over saying “Russia doesn’t have a military base (in Iran), we have good cooperation, and on a case by case basis, when it is necessary for Russians fighting terrorism to use Iranian facilities, we will make a decision.”

In Moscow, Rouhani and Putin signed several bilateral agreements that served as window dressing for these kinds of state visits. The two leaders affirmed their commitment to peace in Syria, where they have both backed the Assad regime, as well as introducing new economic cooperation mostly in energy and industry, especially calls for reduction in oil production as a means of boosting global oil prices.

Both nations’ economies have been severely impacted by the steep decline in petroleum as a result of stepped up production from the U.S. and Saudi Arabia.

Though Moscow and Tehran both support Assad, their views on Turkey and its involvement in the conflict have differed. Though Moscow envisions Ankara as a part of the solution to the Syrian conflict, Tehran has been more wary – particularly after Moscow and Ankara left Tehran out of a truce they brokered in December, according to Voice of America News.

Aside from the photo opportunities for Rouhani, the Iranian regime stayed the course in maintaining its ever-increasing variety of militant and extremes actions, including reports of a renewed military commitment to Houthi rebels in Yemen in an increasingly volatile war that threatens to drag Saudi Arabia and the Gulf States into direct conflict with Iran.

A group of analysts known for research in global security threats said in a new report that the increase in Iranian involvement is to offset the gains made by Yemeni government troops supported by the Saudi-led Arab coalition forces.

An increased Iranian role will prolong Yemen’s civil war and make the conflict more sectarian, worsening Yemen’s humanitarian crisis and allowing Al Qaeda in the Arabian Peninsula (AQAP) to expand its support base within Yemen, according to Gulf News.

“The deployment of inter-operable proxy forces is part of Iran’s evolution of a form of hybrid warfare that will allow it to project significant force far from its borders and fundamentally alter the balance of power in the region. Iran may increase its engagement in Yemen if US support for the Saudi-led coalition threatens the Al Houthi-Saleh faction’s survival,” they said.

The Critical Threats Project run by the public policy think tank the American Enterprise Institute has published the analysis on their website, providing information on Iranian military assistance to Yemeni rebels.

“Iran may attempt to incorporate the Al Houthis into its Axis of Resistance coalition, which Iran uses to contain the US and its regional allies,” the report stresses, warning that further escalation in the Yemeni civil war will threaten freedom of navigation in the Red Sea, risking both global commercial markets and the US Navy’s freedom of movement in the region.”

The analysis claimed that Iran had attempted to smuggle over 2,000 small arms into Yemen in 2015 and 2016, in addition to a large stockpile of other weapons.

As the flashes go off in Moscow, the rest of the Middle East is dreading what next chapter of hell the Iranian regime is set to unleash.