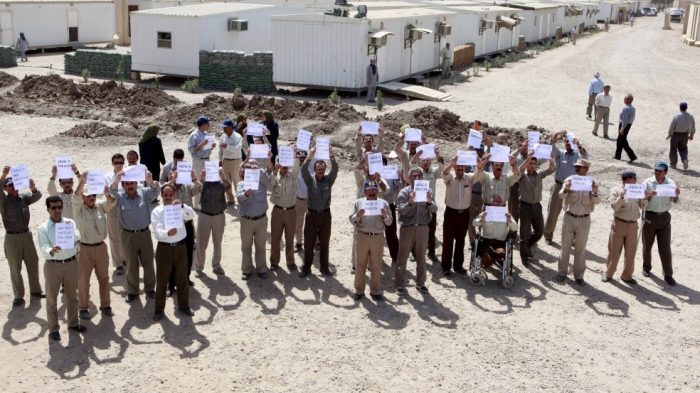 Relocation of Iranian Dissidents a Triumph Against Regime Efforts

A camp in Iraq has been home to a large group of Iranian dissidents and a constant thorn in the side of the mullahs in Tehran. Since 1986, the People’s Mujahedin Organization of Iran (PMOI/MEK), one of the largest and oldest Iranian resistance groups opposed to religious rule of the Iranian regime, has resided in Iraq, its numbers swelled by Iranians fleeing the mullahs’ rule over the years.

Camp Ashraf was a monument to the tenacity and endurance of the Iranian resistance movement which took over a barren piece of land without facilities, infrastructure or even a source of water and turned it into a modern city complete with schools, medical and manufacturing facilities and even sports fields.

It was partly used as a U.S. military base during the Iraq invasion and eventually turned over to the Iraqi government in 2009 with the PMOI population rising to as much as 3,400 residents by 2012.

In the aftermath of the U.S. drawdown of forces in Iraq, the Iranian regime increased its influence within the Iraqi government of Nouri al-Maliki, eventually forcing the expulsion of Sunnis from the coalition government and rearming the Shiite militias, part of the terrorist Quds force a branch of IRGC.

The Iranian regime influence manifested itself with an increasing number of deadly attacks on the residents of Camp Ashraf by Iraqi security forces at the behest of Iranian officials. Over the past 10 years, Camp Ashraf has been attacked several times, the worst being on April 8, 2011 when Iraqi security forces stormed the camp and killed as many as 36 and wounding 320 residents, and on September 1, 2013, leaving a death toll of 52 victims.

The attacks had been widely condemned by human rights groups such as Amnesty International and the United Nations.

For the PMOI members living there, surviving against this constant harassment was a symbol of the resistance to the mullahs’ efforts and a constant reminder to Tehran that Iranians stood against their tyrannical rule.

As part of a U.S.-brokered agreement, relocation of the PMOI members to safe third-countries willing to take them became the compromise that ultimately helped save these lives and place them out of the reach of the Iranian regime.

For the Iranian regime, the continued existence of PMOI/MEK was anathema to it because it represented a viable alternative to the rule of the mullahs and offered a narrative of a free, open, democratic and pluralistic government alternative to what the Iranian people experienced, which is why the regime placed such an emphasis on attacking Camp Ashraf, as well as banning membership in the group in Iran; making it punishable by imprisonment or death.

Almost 2,000 dissident Iranians resettled in nearly a dozen European countries, including the UK, since the start of 2016.

Shahin Gobadi, spokesperson for PMOI/MEK, said the successful relocation of the group represented a “major blow to the clerical regime and a major victory for the Iranian Resistance”.

He added: “One has to keep in mind that this happened despite all the conniving and conspiracy and obstructions by the clerical regime which sought to force the residents to either give up resistance and succumb or to be massacred.”

A milestone was reached when the last PMOI/MEK members were safely relocated out of Camp Ashraf to Albania this week. Maryam Rajavi, the president-elect of the Iranian Resistance, heralded this as a major setback for the totalitarian regime.

“In these 14 years, thanks to the endurance of the PMOI and its members in Ashraf and Camp Liberty, and relentless political and international campaigns, the clerical regime’s schemes to destroy and annihilate the Iranian Resistance were thwarted. The Iranian people’s movement for freedom thus took a substantial step forward against the clerical regime. The regime’s plan to guarantee its own survival with the physical elimination of the PMOI/MEK was foiled,” she said.

The significance of the move should not be lost as the regime and its allies in the Iran lobby have tried over the past decade to demonize and denigrate the Iranian resistance movement, but failed in their efforts.

The resistance movement embodied in PMOI/MEK and the umbrella National Council of Resistance of Iran, has been responsible for many of the most devastating disclosures about the illicit activities of the mullahs in Tehran, including the first revelations of Iran’s secret nuclear program, as well as the ongoing deterioration of human rights in Iran.

It is for those reasons and more that the Iranian regime has tried hard to eradicate the movement and its members, but after nearly five years, the last members of the Iranian resistance are finally in safety and security.