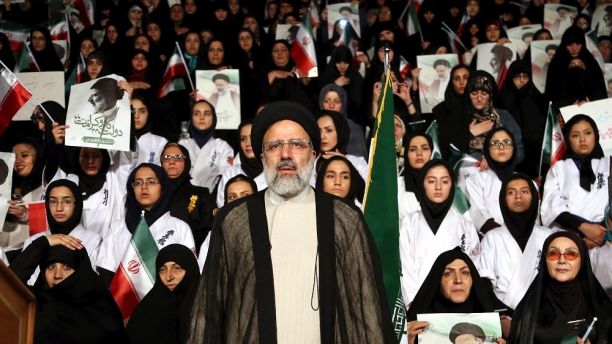 Iran Election Leaves Confusion and Chaos in its Wake

The re-election of Hassan Rouhani to another term as president of the Iranian regime came as no surprise to experienced Iran watchers and the larger dissident community; particularly since the election process in Iran is essentially rigged from the start by the process of eliminating thousands of candidates who register to run for the office, but this has not stopped the Iran lobby from claiming the win was a mandate for so-called “moderate” policies.

One example of this myth-making comes from the National Iranian American Council which noted Rouhani’s win with an analysis on its website.

According to the NIAC, more than 41 million Iranians voted in Iran’s May 19th Presidential election, or nearly 75% of the electorate. The NIAC claims that figure included tens of thousands of Iranians in the diaspora with a remarkable feat given the obstacles imposed by Iran’s unelected institutions.

It’s a silly argument to make since many election analysts who have studied Iranian elections have noted the past practice of ballot stuffing and double counting of ballots cast in presidential and city council races in order to boost overall numbers.

There is also the infamous 2009 election “victory” of Mahmoud Ahmadinejad which was widely considered to be illegitimate for the same tactics.

The claim of high Iranian voter turnout would be similar to basing the election turnout for the Hillary Clinton vs. Donald Trump race on counting ballots cast for state races as separate and unique.

It is even more ironic for the NIAC to claim a high turnout from the Iranian diaspora when it has previously openly condemned large portions of the diaspora involved in the Iranian resistance movement, such as the People’s Mujahedin Organization of Iran.

The NIAC also claims that the election was a 57-38% landslide for incumbent Rouhani, and a defeat for so-called hardliners – including the leadership of Iran’s judiciary and Revolutionary Guard Corps (IRGC) – which publicly mobilized for perceived conservative candidate Ebrahim Raisi

What the NIAC doesn’t admit to is that the election was precisely a victory for the hardliners because the regime government is controlled and directed by the same hardliners who claim to be moderates. All Iranian officials from the Rouhani on down to the lowliest village representative all have to swear the same oath of fealty and allegiance to the regime’s religious leadership and theocracy.

There is no distinction within the Iranian regime between moderates or hardliners since all are beholden to the same power structure.

The NIAC also claimed the election was a referendum on the nuclear deal, but what it fails to do is make the distinction of how the election was engineered to deliver a pre-determined outcome. By setting up a race between Rouhani and Raisi, the mullahs created the perception of a moderate vs. hardliner battle and all but ensured Rouhani’s election as a choice of the lesser of two evils.

The election was never about the nuclear deal since most Iranians have not received any benefits from the deal and probably won’t for many more years. For Iranians who voted for Rouhani, the election was simply a choice of choosing a less odious candidate than another, which tends to be the basic choices provided by the mullahs.

To keep that fiction up, Raisi and his supporters are now even accusing Rouhani of rigging the vote with widespread voter fraud.

“Tampering with the numbers of people’s participation is inappropriate. Not sending ballots to centers where the government’s opponent has a chance of getting votes is very inappropriate,” Raisi was quoted as saying.

“I ask the Guardian Council and the judiciary not to let the people’s rights get trampled. If this vote-tampering is not looked into, then the people’s trust will be damaged.”

The claim is humorous given the regime’s predilection for rigging elections, but Raisi’s claims might very well be genuine, but in the end irrelevant since the mullahs got the result they wanted, which was to fool the rest of the world.

The need to fool the world is necessary for the Iranian regime as it continues to implement an aggressive agenda seeking to expand its sphere of influence throughout the region, which is why recent news that Iranian-backed Iraqi Shiite militias were on the very of opening a land corridor from Iran to Assad-regime controlled territory in Syria is worrisome.

The opening of such a corridor would accelerate Iran’s ability to ship weapons and fighters to Syria without having to resort to more clandestine methods such as using commercial Iranian airliners to ferry troops and supplies.

Syrian rebel sources have warned of advances by the Syrian army and Iranian-backed militia to reach the border.

The news of Iranian involvement in other regions included reports from Afghanistan of Pakistani and Iranian nationals fighting for ISIS elements.

Afghanistan Nangarhar provincial Police Chief Abdul Rahman Rahimi said that the Pakistani and Iranian detainees confessed that militants were being funded by Iran and Pakistan.

The attack against the U.S. didn’t stop either after the election as top mullah Ali Khamenei continued his customary verbal broadsides against the U.S. by marking the start of the Muslim holy month of Ramadan by ripping Saudi Arabia, saying its Sunni rival is being pumped for money by the U.S., according to Agence France-Presse.

Khamenei’s comments comes after President Trump brokered a $110 billion defense deal with the Saudis during his first foreign trip in office.

The defense deal between the U.S. and the Saudis will bolster Riyadh’s defense capabilities by providing more equipment and services to combat extremist terror groups and Iran.

Even as the Iran lobby claims the Iran election has resolved much, the opposite has been the truth. 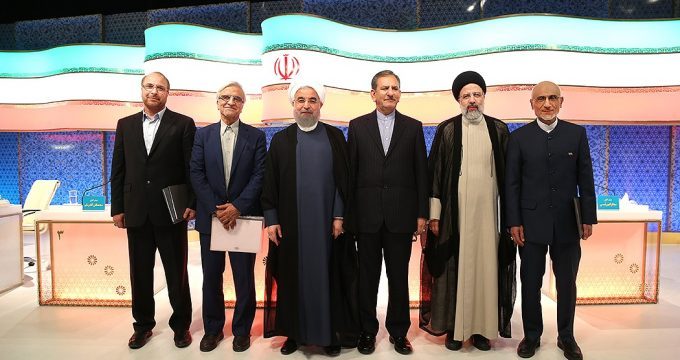 With only scant days before the Iran presidential election, the Iran lobby’s most ardent supporters weighed in on the race with typical obsequiousness. The best example was an editorial by Trita Parsi, founder and president of the National Iranian American Council, in Foreign Affairs.

Predictably he offered up one of the more ridiculous spin lines in the history of disinformation on behalf of the Iranian regime. Parsi actually tried to push the idea that top mullah Ali Khamenei had no influence on the outcome of the election and that “reformist” former president Mohammad Khatami was the real power in this election.

Parsi bases that silly idea on the concept that Khamenei represents the “establishment” and as such his perceived candidates are constantly defeated at the polls by the Iranian people.

First of all is the idiotic idea that Khamenei has no influence on the election.

The Supreme Council has the final say in terms of vetting candidates to appear on the ballot for any election right down to a lowly provincial seat. Khamenei has the right to directly select half of the Council’s members. The others are appointed indirectly by him as well.

So right off the bat, Khamenei exercises a monopoly on who even goes on the ballot before the first vote is cast.

Secondly, the regime’s constitution itself ensures that only candidates meeting specific loyalty tests to the regime and its theocracy are allowed to run for office, thus ensuring adherence to preserving the mullah’s rule in Iran.

Control of who appears on the ballot allows Khamenei to control the narrative as to which candidates are perceived to be “moderate.” By stacking the ballot with four candidates who essentially have no chance at all, Khamenei can create the perception of a clear choice between a “moderate” Hassan Rouhani or a “hardline” Ebrahim Raisi.

Over 1,636 people registered to appear on the ballot for president. Only six were approved by Khamenei’s council.

Both of these men are dyed-in-the-wool insiders who are dedicated to serving the religious theocracy and Khamenei’s wishes, but Iran, with the help of the Iran lobby, creates a false perception of a real “choice” in the election.

“Another unknown candidate by the name of Mahmoud Ahmadinejad defeated the presumed favorite, the late Ali Akbar Hashemi Rafsanjani, who is considered one of the pillars of the revolutionary regime. But precisely because Rafsanjani was perceived as an embodiment of the establishment, the antiestablishment vote went to Ahmadinejad,” Parsi writes.

Of course, Parsi tries to posit that the 2009 race, which was widely considered rigged for Ahmadinejad causing widespread mass protests, was in fact actually a portrayal of the former “outsider” to be an “insider” now which caused the vote discrepancy.

Far from being honest with the reader, Parsi tries yet again to pull the wool over everyone by slicing Iran’s politicians into neat little camps opposed to each other and representing widely divergent viewpoints.

The reality is that there is very little difference between these candidates since are all loyal members of the regime.

Take Rouhani for instance. He was elected on the platform of being a moderate vowing reforms, but during his tenure, Iran has taken a huge step backward in human rights and now is involved in three wars sending thousands of young Iranians to fight and die, while the mullahs and elites skim huge personal fortunes through a massive network of corrupt shell companies.

These are not the facts that Parsi wants people to know about since it would ruin his carefully constructed fantasy.

Benny Avni writes in the New York Post how this election may be one where Khamenei decides the pretense of a moderate face for the regime is no longer necessary since Iran gained concessions from the nuclear deal already.

“Just as Americans and others are reorienting themselves for the age of President Trump, so are the mullahs. In their calculation, they now need to replace the friendly sounding voices, like those of Rouhani and his sidekick, Foreign Minister Javad Zarif, with angrier men,” Avni writes.

“Raisi is an insider who has climbed the political ladder. Supreme Leader Ali Khamenei is said to favor him as successor, when the time comes,” he adds.

“But before Raisi follows Khamenei and his predecessor, Ayatollah Ruholla Khomeini, at the top of the mullahs’ greasy poll, Raisi first needs a bit of public exposure. He could also use some governing experience, which he currently lacks. The position of president, which doesn’t have nearly as much power as Supreme Leader, is a perfect stepping stone.”

More evidence in the manipulation of the outcome was on display when Raisi’s path to the presidency became easier Monday, when a fellow hardliner, Tehran’s Mayor Mohammad-Baghar Ghalibaf, dropped out of the race.

Analysts believe Ghalibaf won the TV debates and is clearly more qualified, but, under pressure, he’s now calling on supporters to vote for Raisi.

What is clear from all this is that Parsi makes no mention of Raisi in his editorial which only demonstrates how close Raisi is to becoming elected and returning a public hardliner back into power to confront a U.S. administration no longer committed to a policy of appeasing Tehran.

We can be assured that if Raisi is elected, Parsi will no doubt ascribe his election as resulting from being a “outsider.”