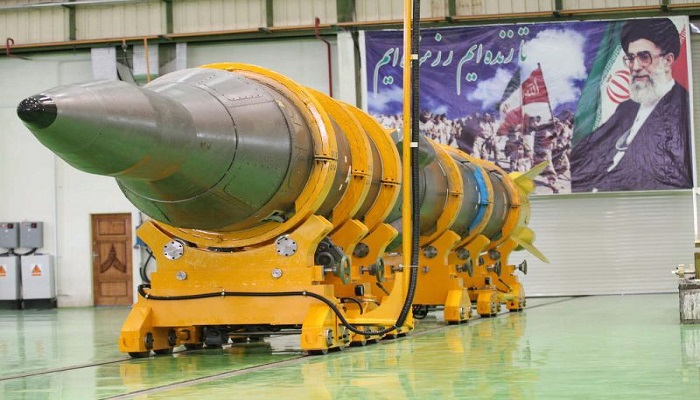 Iran’s Sejil 2 missile is seen in front of a picture of Supreme Leader Ali Khamenei before a test launch.
Photo credit: The Daily Signal

In a recent piece in Truthout, Gareth Porter lays out a historical rationale for Iran not wanting to develop nuclear weapons based on a fatwa, or religious edict, issued by Supreme Leader Ali Khamenei. He goes on to cite a historical precedent with Ayatollah Ruhollah Khomeini, Iran’s first supreme leader in the new Islamic Republic, issuing his own fatwa against chemical weapons after Iraq used them in Saddam Hussein’s war against Iran.

Unfortunately Mr. Porter’s observations and conclusion are fatally flawed for a number of reasons, the biggest being that unlike he has reasoned, the Iranian regime did use chemical weapons against Iraqis, and since the then Supreme Leader lied about it, the present one can certainly lie as well. It is also worth mentioniong that the present Supreme Leader is often  under question as a habitual liar.

It is a given of politics since the dawn of civilization that people in power will do or say most anything that preserves their power or position. Iran and its religious theocracy are not immune to the same temptations. Running a nation state in the service of your religious belief is not much different than serving your political party. In Iran’s case, Khamenei has exemplified the slightly bipolar nature of politics by condemning nuclear weapons, yet ardently defending Iran’s capabilities to develop them.

Mr. Porter fails to note during this summer’s first round of nuclear talks between Iran and the P5+1 group of Western nations, Khamenei delivered his nation’s version of the State of Union where he went into highly technical detail about Iran’s desire to not only preserve its enriching capacity, but indeed significantly expand it almost a hundredfold from where negotiators were at. While negotiators were debating allowing Iran to keep anywhere from 1,900 to 4,000 centrifuges, Khamenei called for 190,000 Separative Work Units (SWU) and the presumption of the rights to build enough centrifuges of the next-generation models (which are the most efficient at refining uranium into highly enriched fuel suitable for nuclear warheads or heavy water reactors which could produce plutonium) as the minimum requirements for their “peaceful nuclear program”.

Since Khamenei represents the final authority in Iran on international treaties, that round of talks was effectively dead on arrival this past July. It is a credit though to the significant international circle of Iranian regime sympathizers and cheerleaders that that collapse was not fatal and in fact another round of talks were scheduled with a November 24th deadline this year.

Mr. Porter bases nearly all his story on the single viewpoint of Mohsen Rafighdoost, who served as minister of the Islamic Revolutionary Guard during the Iran-Iraq war and is obviously responsible for any chemical attacks carried out during the war, and claims that he had broached the subject of weapons of mass destruction to Khomeini who dissuaded him at the time. However as documented by many media outlets, including an article in New York Times, dated January 31, 2003, the truth is the polar opposite.

We only have the current Supreme Leader’s words to go by and unlike the tea reading that went on at May Day parades in front of Lenin’s Tomb of the Politburo members from the old Soviet Union, we are left to discern the rants and ravings of a theocrat that hasn’t spared anything against his own people, while his men in power are widely known to govern the primary state sponsor of terrorism, and had already run a clandestine nuclear program for 18 years before it was first exposed by its opponents in 2002. And in his most recent comments, he certainly lays open the door for enriching on a massive scale.

Indeed the clear facts, unlike Mr. Porters picture of the situation is totally different. In Iran’s case under the leadership of president Hassan Rouhani, Khamenei’s handpicked moderate face to the world, police crackdowns on dissent have sharply risen as have executions; now in excess of 1,000 according to Amnesty International. Access to the internet and outside communications and social media are sharply curtailed if not blocked completely and Iran has stepped up its military and financial support to terror groups such as Hamas and Hezbollah, as well as become involved in the Syrian civil war and the battle with ISIS in Iraq in an attempt to preserve its control of a Shiite hegemony in the region.

Given those actions, it is hard for anyone to take Iran’s leadership at its word that its only interest is in boosting its economy to give its people more access to iPhones and clothes from Gap Kids.

While Mr. Porter’s hopes for a nuclear-free Iran may be commendable and sincere, he may very well have been taken for a ride by an Iranian flying carpet courtesy of the Revolutionary Guard Corps.