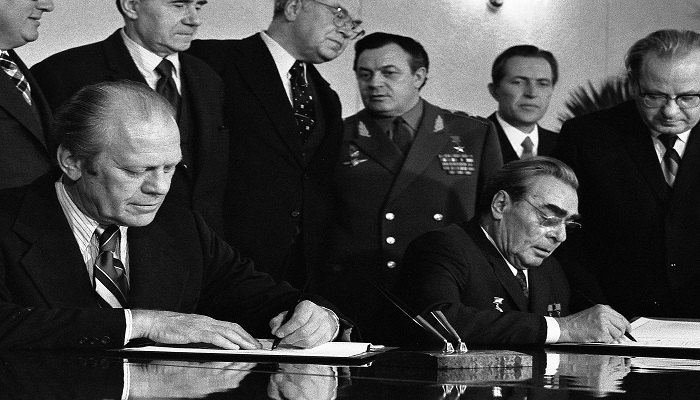 The lack of intellectual rigor coming from the Iranian regime’s foremost lobbying team in the National Iranian American Council fails to impress and today is no exception with an inane editorial written by Tyler Cullis and appearing in the New York Times.

In it, Cullis attempts to draw parallels between the diplomatic efforts made by President Gerald in overcoming Senate opposition to craft an accord with the old Soviet Union in an effort to lay the groundwork for détente between the East and West. He aligns this scenario with what is currently happening in talks between the Iranian regime and the P5+1 group of nations seeking to restrict the mullahs march to a nuclear weapon.

Cullis fails to mention several key and crucial distinctions between the two that have an even more profound impact on current talks.

For one thing, President Ford attempted to make human rights a core feature of the accords in recognition of the terrible human rights violations occurring regularly within the Warsaw Pact nations. In a speech he gave while trying to sell the Accords to the American public, he said:

“The Helsinki documents involve political and moral commitments aimed at lessening tension and opening further the lines of communication between peoples of East and West. . . We are not committing ourselves to anything beyond what we are already committed to by our own moral and legal standards and by more formal treaty agreements such as the United Nations Charter and Declaration of Human Rights.”

It was significant for President Ford to stress the human rights aspects of the Accords since the agreement would effectively make permanent the Soviet Union’s annexation of the Baltic states of Lithuania, Latvia and Estonia after World War II and place them under harsh rules for the next 30 years.

The Accords were also significant because they were not a treaty per se, as evidenced by the strong objections by nations such as Canada, Spain and Ireland in allowing the Soviets to swallow the Baltic States. In a bit of historical irony, the Accords laid the groundwork for the later Organization for Security and Cooperation in Europe, the same working group which has floundered in building a cohesive response to Russia’s recent annexation of the Crimea and invasion of Eastern Ukraine.

All of which further demonstrates the feebleness of Cullis argument. At no point during the P5+1 talks has the Iranian regime’s dismal human rights record ever been put on the negotiating table, nor its long support and sponsorship of global and Islamic extremist terror groups.

One of the key recognitions of the Helsinki Accords was its commitment and focus to the preservation of human rights as a key element in the dialogue between the West and Soviet Union. It presented the framework by which later talks under détente efforts by preceding Presidents were always framed by the need to dissuade the Soviets from abusing its own people and those of nations under their sway.

It is a model of success that has borne early fruit with the Iranian regime by forcing it to come to the negotiating table after economic sanctions began having their desired effect, but Cullis and other regime sympathizers would have us give Iran’s mullahs the breathing room necessary to rebuild their economy while arming themselves with nuclear weapons under the guise of peaceful talks.

While Cullis holds the Helsinki Accords as a model for Iranian talks, he unwittingly reinforces the true reason why those Accords succeeded and it had nothing to do with President Ford ignoring Congress, but had everything to do with his focus on human rights.

According to the Cold War scholar John Lewis Gaddis in his book “The Cold War: A New History” (2005), “Leonid Brezhnev had looked forward, Anatoly Dobrynin recalls, to the ‘publicity he would gain…when the Soviet public learned of the final settlement of the postwar boundaries for which they had sacrificed so much’… ‘[Instead, the Helsinki Accords] gradually became a manifesto of the dissident and liberal movement’… What this meant was that the people who lived under these systems — at least the more courageous — could claim official permission to say what they thought.”

We can only hope that this proposed agreement with the regime gets scrapped and instead a true human rights-driven manifesto takes its place rightly restoring the importance of Iran’s mullahs getting an agreement conditioned only by their acceptance and implementation of human rights improvements and the renunciation of terror.

Thank you Mr. Culis for so eloquently making my point.