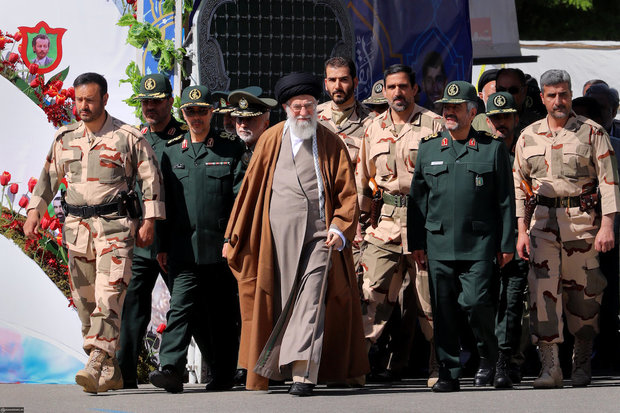 Ali Khamenei Reinforces Why Things Will Not Change After Elections

Ali Khamenei, the mullah at the top of the power pyramid in Iran, gave another of his vitriolic speeches in which he reinforced exactly why things won’t change much in the Iranian regime after presidential elections May 19th no matter who gets elected.

He warned that any disrupters of the election would receive a “slap in the face” which is a not so-veiled warning to anyone planning protests over the election results.

The warning came in remarks he made to graduating cadets of the Revolutionary Guard Corps, in which he stressed the importance of security as the dominant issue in the election. An emphasis that is at odds with protests around Iran by ordinary Iranians demanding better jobs wages and economic growth.

The tensions are so bad that Hassan Rouhani’s recent appearance at the scene of a mine collapse trapping and killing scores of miners was met with derision and protesting miners kicking and banging on his car.

Those underlying tensions are a clear signal to Khamenei and the other mullahs of the precarious nature of their hold on power, which is why Khamenei chose to deliver his comments before the regime’s military.

It is also why controls on this year’s elections are much stricter with street rallies banned and restrictions on televised debates.

The elections have also done nothing to alter the trajectory of the regime’s military build-up, which if anything has stepped up in tempo as evidenced by Iran’s communications minister recently announced plans to put two satellites into space, but the impending launch may be cover for ballistic missile research.

Mahmoud Vaezi announced on Monday that the two supposedly home-made satellites will be launched into orbit in the coming months. The launches may seem innocuous, but such space technology could be used to help advance Iran’s missile technology.

“Iran is certainly using its satellite program to shield the ICBM (inter-continental ballistic missile) program. The technology and challenges in the two programs are similar in many aspects and one can move from one to another,” Saeed Ghasseminejad, an Iran research fellow at the Foundation for Defense of Democracies, told The Daily Caller News Foundation.

Iran needs to disguise its ICBM program, he added, and satellite launches are an ideal method. The Islamic Republic has been sanctioned by the U.S. for its missile tests in the past, even since the signing of Joint Comprehensive Plan of Action nuclear agreement in 2015. Iran’s military has engaged in at least eight missile launches since the deal was inked.

Iran’s missile arsenal forms the backbone of its national defense. The Islamic Republic was cut off from Western military support after its revolution in 1979, diminishing the capabilities of its air force. The country instead focused on advancing its missile program, which was easier to maintain thanks to the help of North Korea. An Iranian missile tested in January had North Korean origins, according to the Pentagon.

That commitment to Iran’s missile capability was reinforced by Khamenei in the same remarks to the Revolutionary Guard Corps cadets.

“The hype over Iran’s missile capability is because of their (enemies) spite and anger about this element of power in Iran,” Khamenei said.

“We possess missiles which are very precise and can hit the targets with high precision from thousands of kilometres away,” he said, adding that “We will preserve this capability with all in power and will increase it powerfully.”

He said that Iran’s military power serves as a tool for “deterring purposes” and relies on domestic potentials.

The Hoot torpedo, which has a range of six miles, was fired in the Strait of Hormuz, where much of the world’s oil passes each day.

It’s unclear if the torpedo test was successful.

It is not the first time Iran has tried to test this torpedo. The last time it did so was in February 2015. It also follows a cruise missile test from a midget submarine also based on North Korean designs.

Iranian officials announced in April that the regime’s defense budget increased 145 percent under Rouhani, hardly the sign of a government intent on becoming a “moderating” influence in the region as promised by the Iran lobby.

In the end, very little has changed in Iran and will remain so no matter who gets elected. The only real hope for democratic reforms and change remains empowering the global Iranian resistance movement and give it the international backing it needs to become a force within Iranian politics again.