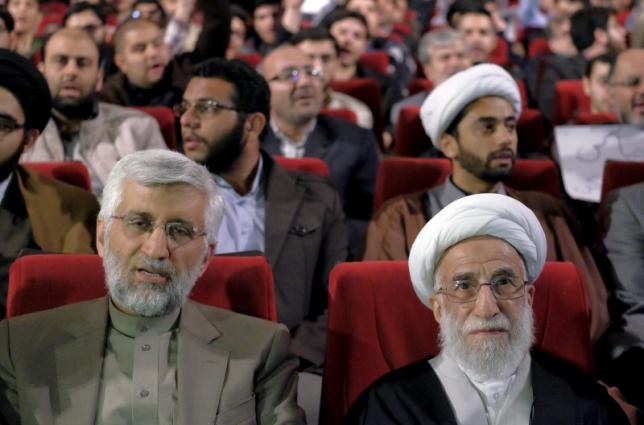 The headlines screamed out from various news publications around the world on the day before parliamentary elections were to be held in Iran:

Most of the international media seem to be suffering from the same form of mass amnesia in that they have conveniently forgotten the fact that the elections were rigged months ago when the Guardian Council, whose members are handpicked by top mullah Ali Khamenei, kicked off virtually all candidates from ballots with even a hint of moderation or lack of ideological purity.

Just as it has done in every election since the mullahs seized the revolution in 1979 and turned Iran into an theocratic dictatorship, there is no doubt to the outcome. There was no doubt when Mahmoud Ahmadinejad was re-elected in a blatant steal of the ballot box and there was no doubt when Hassan Rouhani was elected after virtually all potential challengers were rejected by the same Guardian Council that mowed down this election.

So as Iranians go to the polls, they are going to find themselves confronted with few choices and fewer options if they truly want regime change. Not only have any potential “moderates” been knocked off the ballot, but true opposition parties and dissident groups are outlawed and membership in any is grounds for arrest and even execution.

While the U.S. is engaged in a presidential race marked by hyperbole, multiple debates, flooding of social media and a months-long process of examination, questioning and arguing with candidates, the mullahs in Iran spent months dumping candidates and allowing only one week of actual campaigning.

David Blair, writing for the Telegraph, visited Qom, one of Iran’s holiest cities, and found residents there with little to no choices available to them.

“If any of the inhabitants of Iran’s second-holiest city wish to vote for reformists in Friday’s election, they will be disappointed,” he writes. “Every moderate candidate who tried to stand in Qom has already been disqualified, leaving the 1.1 million people of this desert city – known as the Shia Vatican – to choose between different brands of hardliners.”

“The voting that will take place in Qom sums up everything important about Iran’s election. On the face of it, people will have the freedom to choose both a new Majles, or parliament, and a new Assembly of Experts, the body which appoints and supervises the Supreme Leader, Ayatollah Ali Khamenei,” Blair correctly points out. “In reality, another committee in Iran’s labyrinthine power structure, the Guardian Council, has already vetted every candidate for both elections, banning almost half of the 12,000 hopefuls from standing and weeding out most of the reformers.”

Outside of Tehran, Blair and other journalists have cities and communities in more rural areas with virtually no moderates on any ballot and limited campaigning with most Iranians resigned to picking from lists of hardliners vs. more hardliners.

A senior fellow at the Washington Institute for Near East Policy, writing in the Wall Street Journal, acknowledged the same situation playing out.

“The upcoming vote will largely mirror past elections in Iran, being neither free nor fair. The candidates have been closely screened and the outcome is expected to uphold the largely conservative makeup in parliament and the Assembly of Experts. In addition, the victors will remain largely dependent on military institutions, namely the Islamic Revolutionary Guard Corps. Moderates will stay marginalized in this arrangement and face intensified pressure from hard-line colleagues,” Khalaji said.

He goes on to point out that Rouhani’s election was devoted to getting a nuclear deal done to relieve the regime of crippling economic sanctions.

“Mr. Rouhani has focused most of his energy on the nuclear deal. He has not improved the dismal human rights situation in Iran”… During his tenure, military and intelligence suppression of political activists has remained robust and effective,” he writes.

“Presidential candidates in 2017 will need to establish strong relations with the supreme leader and his apparatus, especially the Revolutionary Guards, and are likely to succeed by reassuring these entities that their political and economic interests will not be undermined,” he added.

The fact of the matter elections in Iran are already pre-determined. The Revolutionary Guards and religious clergy exert overwhelming control of the country’s economy and industries and quickly stifle any dissent by tossing dissidents in prison and hanging them publicly to deter any future opponents.

That control will almost certainly continue to flow through regime leaders such as Ahmad Jannati who will be a shoo-in for re-election to the 88-member Assembly of Experts and will also shepherd the process to ensure the replacement for Khamenei is just as ideologically pure and committed to the Velayat-e-Faqih and more important keep the mullahs hold on power intact.

In remarks echoed by Khamenei, Jannati this week accused the United States and Britain of trying to influence Friday’s votes.

“The United States and the United Kingdom were trying to take advantage of the Iranian elections and send their agents and infiltrators into the Assembly of Experts, but God helped us and we managed to identify and block them all,” he was quoted as saying by the Fars news agency on Wednesday.

Jannati is a clear example of the type of extremist Iran will be electing and it was already decided long ago. Today’s vote is just a formality.