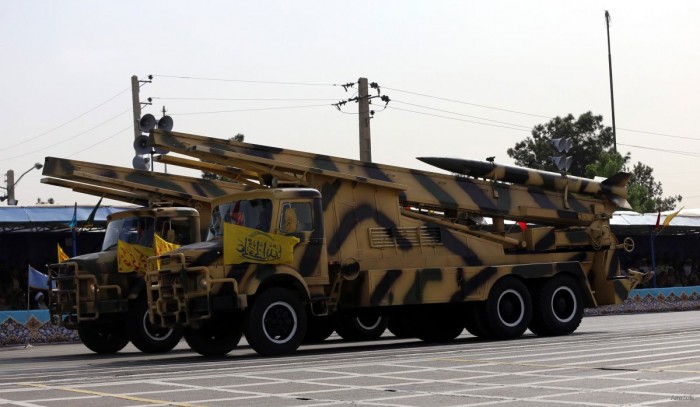 Sounding as defiant as ever, the Iranian regime announced it would not accept any restrictions over its ballistic missile program after the United Nations Security Council’s Panel of Experts concluded in a confidential report that last October’s test firings of a new ballistic missile violated UN restrictions banning development of nuclear-capable missiles by the Islamic state.

“We tested Emad to show the world that the Islamic Republic will only act based on its national interests and no country or power can impose its will on us,” Defense Minister Hossein Dehghan was quoted as saying by the state news agency, IRNA.

Ballistic missile tests by Iran are banned under Security Council resolution 1929, which dates from 2010 and remains valid until the July nuclear deal between Iran and world powers goes into effect, according to Reuters which first broke the news about the confidential UN report.

Once the deal takes effect, Iran will still be “called upon” according to Reuters not to undertake any ballistic missile work designed to deliver nuclear weapons for a period of up to eight years, according to a Security Council resolution adopted in July right after the nuclear deal.

The regime contends that the resolution would only ban missiles “designed” to carry a nuclear warhead, not “capable of”, so it would not affect its military program as Tehran does not pursues nuclear weapons. The distinction is akin to saying a gun that is not designed to kill humans expressly, but is capable of killing humans is somehow different.

It is that kind of linguistic gymnastics which has characterized the regime’s approach to nuclear negotiations and its support of terror groups and the Assad regime in Syria. Regime leaders such as top mullah Ali Khamenei have consistently issued statements inconsistent with public statements made by other regime officials such as Hassan Rouhani and foreign minister Javad Zarif. The contradictions coming out from the regime could give anyone fits trying to detangle the mess.

Therein lay the strategy of the mullahs in that they seek to create this confusion in order to provide the wiggle room necessary to justify any action they see fit. By declaring its missiles not expressly designed for nuclear weapons, they can ignore international bans. By declaring the lifting of any sanction under the nuclear deal tardy or slow, the regime could declare the agreement null and void at any time and build a nuclear weapon at will.

It is the false promises made during the nuclear talks that are now coming to haunt the rest of the world as they see the Iranian regime do whatever it pleases to fit the narrative it chooses to articulate.

Rouhani himself couldn’t stop from making a verbal slam dunk when he went on state television calling the vote by the International Atomic Energy Agency’s board of governors to close out its inquiry into the regime’s past military practices in its nuclear program in spite of highly critical findings by inspectors that the regime continued to develop nuclear weapons well into 2009 and still had not fully answered outstanding questions.

The Tehran regime has announced its intentions to bulk up on Russian military hardware in a buying binge that started with completion of the sale of S-300 advanced anti-aircraft missile batteries.

On the shopping list by the regime’s military are advanced, fifth-generation Russian T-90 battle tank, along with a range of other major defense items, according to Brig. Gen. Ahmad Reza Pourdastan, the regime’s top ground commander, during a defense conference in the Khorasan region of northern Iran.

With the regime due to receive an estimated $150 billion in frozen assets from the lifting of economic sanctions from the nuclear deal, it is clear now the intention of the regime is to spend heavily on military hardware, not in jumpstarting a moribund economy that is punishing Iran’s citizens contrary to the claims made by Iran lobby members such as Trita Parsi of the National Iranian American Council.

Pourdastan also said during the conference that the military needs helicopters, heavy weaponry and advanced combat equipment. While the new requests undermine Iran’s own defense industry, the ground forces commander said that the country’s military industrial complex will continue to develop, according to the International Business Times.

“The Iranian defense industry has strong potential. Nevertheless, we will constantly take care of modernizing it,” he said.

The new moves on the military front have many in Washington calling for new and increased sanctions on the Iranian regime to address all of the issues not addressed by the original nuclear agreement.

Jennifer Rubin writes in the Washington Post suggesting that “new pressure needs to be applied to Iran.”

She also quotes from Eliot A. Cohen, Ray Takeyh and Eric Edelman in a piece in Foreign Policy, suggesting:

“In addition to revising the nuclear agreement, the United States should punish Iran for its regional aggression, sponsorship of terrorism, or human rights abuses. To do so, it should segregate Iran from the global economy by restoring as much of the sanctions architecture as possible. . . . And it should launch a campaign of political warfare to intensify the Iranian public’s disenchantment with the regime and deepen dissension within the ruling circle.”

It would be wise for the world to recognize another race has begun on trying to restrain a newly militant Iranian regime.