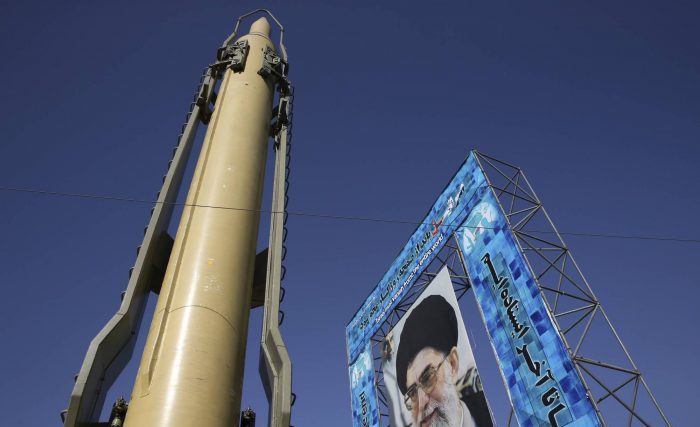 The Iranian regime’s default argument in favor of its militant actions is usually for self-defense. Why did we save the Assad regime in Syria? For self-defense.

Why did we not object to Assad using chemical weapons against his own people? For self-defense.

Why did Iran supply the Houthis in Yemen and foment a revolution that threatened a war with Saudi Arabia? For self-defense.

Why did Iran crack down on journalists, dissidents, students, artists and even women who take Zumba dance classes? For self-defense.

The Iran lobby was no different with regime advocates such as the National Iranian American Council consistently excusing regime acts such as firing ballistic missiles as a necessary adjunct to national defense in the face of U.S. or Saudi aggression.

Few people around the world actually believe these are really acts designed for self-defense so for our purposes, let’s move past the false arguments and get to the real heart of the matter; Iranian regime is posing for the world stage.

Dr. Majid Rafizadeh, president of the International American Council, wrote about this in an editorial for the Arab News.

“Iran’s military adventurism and destabilizing behavior have reached an unprecedented level that could turn regional tensions into a conflagration. Tehran’s stepped-up interference in Yemen is a direct threat to the Bab Al-Mandab strait and the security of neighboring countries. US officials say Iran is now providing cruise missiles to Yemen’s Houthis,” he writes.

“In Iraq, Tehran is obstructing efforts by state and non-state actors to bridge Sunni-Shiite gaps. It seeks to control Iraq, and has started a widespread campaign to influence decision-making and secure a victory for Shiite groups in parliamentary elections,” he adds.

He also cites Iran’s first use of ballistic missiles on the battlefield as a disturbing development since it crosses the proverbial Rubicon for Iran in the mullahs’ willingness to use these weapons.

“Iran is beginning a new stage in its interventions in Arab countries via its ballistic missile capabilities. This will intensify sectarianism, radicalization and militarization of regional conflicts. If this is met with silence, Tehran will be further empowered and emboldened because it interprets silence as weakness,” Rafizadeh said.

“The US and the international community should hold Iranian leaders accountable. This can be accomplished by a combination of political pressure, economic sanctions and force. The US should seek assistance from European allies and a united front with several Middle Eastern powers; this would be a powerful bulwark against Tehran. Sanctions from Muslim countries would be a significant blow to Tehran’s self-portrayal as a leader of the Muslim world,” he added.

But none of that has stopped some world leaders from slipping back into questioning whether or not appeasing Iran might not still be a sound policy to follow; all evidence to the contrary.

Security Council Resolution 2231 called on Iran not to test ballistic missiles capable of carrying nuclear warheads. When Iran conducted missile tests in March 2016, critics led by the United States were infuriated, calling the country’s behavior a violation of the Security Council resolution and a sign that it would not honor provisions of the nuclear accord.

In a report to the Security Council last July on compliance with Resolution 2231, Ban Ki-moon, then the secretary general, said he was concerned that the missile tests might not be consistent with the “constructive spirit” demonstrated by the nuclear accord. He called on Iran to “refrain from conducting such launches, given that they have the potential to increase tensions in the region.”

Of course, with the missile launches in Syria, the Iranian regime basically burned Resolution 2231 in a dumpster.

Which leads us back to the original issue of the mullahs trying to distract attention from their extremist activities.

Brenda Shaffer, a professor with the Center for Eurasian, Russian and East European Studies at Georgetown and a fellow with the Atlantic Council’s Global Energy Center, discusses Iran’s use of ISIS to district from its actions in cracking down in dissidents in a piece for Fox News.

“Through recent news reports we’ve learned that those rounded-up as part of the attacks are all members of the Kurdish and Baluch ethnic minorities. The conflict with Iran’s Kurdish and Baluch minorities is not new: Tehran has been battling for close to a decade a much larger insurgency with both groups, without any evidence of direct links to ISIS,” Shaffer said.

“Tehran’s focus on ISIS as the driving force behind recent terror attacks is right out of the country’s playbook for dealing with ethnic conflict. Even if the Kurdish attackers cooperated with ISIS, their motivations and goals are very different than other affiliates. And even while dozens of Kurds and Baluch have now been jailed, this conflict is not going away anytime soon. Kurdish, Baluch and other domestic ethnic groups in Iran have extensive grievances and there continues to be fallout from the regular executions of activists from these communities,” she adds.

For Iran, the use of fear, distraction and misdirection all are tools to hide the truth. 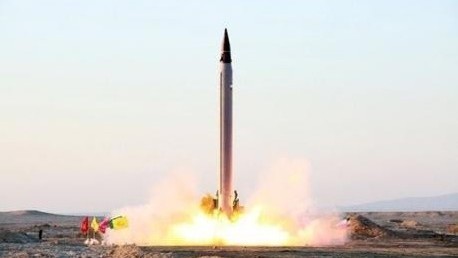 A new Iranian precision-guided ballistic missile is launched as it is tested at an undisclosed location October 11, 2015. REUTERS/farsnews.com/Handout via ReutersThe Iran regime’s top mullah, Ali Khamenei, added his tepid support to the nuclear deal that the regime’s Parliament also approved, clearing the pathway for the regime to get its payday of $150 billion plus billions more in foreign investment and economic activity.

But nothing is ever simple with the inscrutable mullahs of Tehran as Khamenei added the caveat that all sanctions had to be lifted or Iran would walk away from the deal. This reinforces the key stumbling block he placed in front of negotiators when he maintained that the regime had to first receive the benefits of lifted sanctions before it would begin any dismantling of its nuclear infrastructure.

The chicken and egg argument he poses is deliberately cloaked in the obscurity it needs to allow both sides proof of his adherence to the terms of the deal from both sides perspective, while allowing the wiggle room Khamenei wants to set the implementation of the agreement any way he sees fit.

This is readily apparent in the deluge of provocative acts the regime has undertaken since the agreement was signed, including:

These acts put to a lie the claims long made by the Iran lobby during the nuclear negotiations that the regime was only interested in becoming a moderating force within the region. Led by the National Iranian American Council, those same supportive voices for the regime have been struck deaf and dumb in the face of these new violations by the regime.

The test firing of the new ballistic missile was especially provocative and so concerning that the U.S., Great Britain, France and Germany called on the UN Security Council’s Iran sanctions committee to take action over the violation.

In a letter obtained by Reuters containing details on the launch, the nations said the ballistic missile was “inherently capable of delivering a nuclear weapon.”

Even now, news media that once editorialized in support of the nuclear deal have reversed course in noting the worrisome developments by the Iran regime.

“But the Syrian offensive is certainly more than message-sending. If successful, it could eliminate the chance to construct a moderate, secular alternative to the Assad regime, and send hundreds of thousands more refugees across Syria’s borders. It was just such aggression that Mr. Obama acknowledged might be a byproduct of the nuclear deal — and that he vowed to resist. If he remains passive as Maj. Gen. Soleimani’s forces press forward, both Iranian and U.S. allies across the Middle East will conclude that there will be no U.S. check on an Iranian push for regional hegemony,” said the Washington Post in an editorial.

There was also a move by 11 Senate Democrats to push the Obama administration to respond forcefully to the regime’s missile test, pressing the case that a response would set a precedent for how the U.S. would react to any future violations of the nuclear deal.

“We are concerned about the military significance of this test, which is part of a long-term Iranian program that seeks to improve the range and capabilities of its ballistic missiles,” the senators wrote. “We are also convinced that the launch is an attempt to test the world’s will to respond to Iranian violations of its international commitments.”

It is worth noting that several of these same Senators had voted in favor of the deal.

Joshua Keating at Slate raised a similar concern about the fallout from the nuclear deal saying “it certainly doesn’t bode well for the optimistic notion that the deal could lead to U.S.-Iranian security cooperation beyond the narrow areas laid out in the agreement and it certainly doesn’t look good for the administration. Iranian leaders were presumably well aware of this.”

This understanding of the regime’s intentions puts into perspective the potential use of the billions of dollars about to be released into the control of the mullahs and as the International Business Times puts it:

“Pushed by a combination of its own outdated military equipment and the formidable military buying power of its oil-rich Middle East rivals, analysts said Tehran is urgently plotting to upgrade and replace its own antiquated defense technology in favor of Russian- and Chinese-made military equipment by spending oil revenue that’s been trapped in an assortment of banks worldwide for the last three years.”

“Those options range from providing Hezbollah fighters, who are supporting Syrian President Bashar Assad in the Syrian civil war, to boosting aerospace efforts, including space-based platforms such as satellites, to advance its military into the 21st century,” according to Ariel Cohen, senior fellow at the Atlantic Council, an international affairs think tank based in Washington, D.C.

It is clear that the foxes let loose by the nuclear deal are now coming home to hunt.