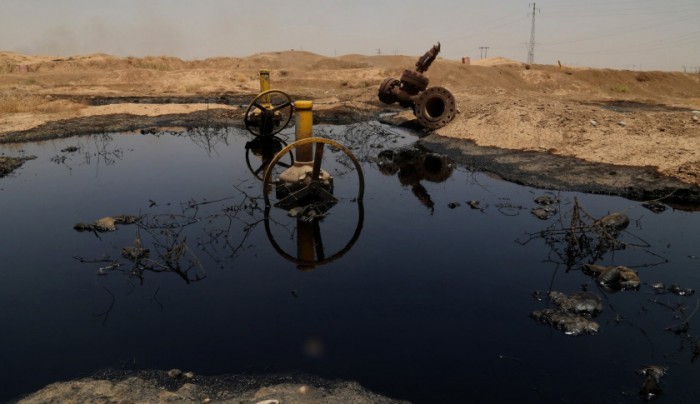 KIRKUK, IRAQ – JUNE 11: June 11 dated picture shows the the view of petroleum pipelines in Kone district, southern Kirkuk that the burglaries steal the crude oil during the clashes in Kirkuk, Iraq on June 11, 2014. Kurdish Peshmerga forces seize the control of Kirkuk where Iraqi army forces and Islamic State of Iraq and the Levant (ISIL) had clashes, and Iraqi forces abandoned the city after these clashes, in Iraq. (Photo by Stringer/Anadolu Agency/Getty Images)

It’s no secret that top Iranian regime leader Ali Khamenei placed preserving the regime of Syria’s Bashar al-Assad as a top priority and committed the Iran’s military and financial resources to keeping him afloat and alive as various rebel groups did battle with the government following the collapse of the Arab Spring protests.

That support to Assad from Iran included billions in cash, arms, ammunition, fighters ranging from Hezbollah terrorists to Afghan mercenaries to Shiite militia from Iraq. It also included Iran’s own Quds Force, Revolutionary Guard Corps fighters and most recently soldiers from its regular army.

Most importantly, the Iranian regime gave Assad its political backing on the world stage with Hassan Rouhani and Javad Zarif making it clear that Iran considered Assad’s removal a red line in the sand which it would not countenance no matter how many Syrian civilians were killed or turned into refugees by the escalating conflict.

For the mullahs in Tehran, the use of barrel bombs on civilians, the recruitment of Russian forces to attack Western-backed rebel groups and the lack of any real engagement against ISIS was not a cause of concern.

New documents just released to news media have shined a disquieting light on one reason why Iran made little or no effort to target ISIS for destruction although it gave much lip service to battling the terrorist group.

The Wall Street Journal published an exhaustive story on Sayyaf’s rise in ISIS and his prodigious organizational skills in building and managing a multi-million oil operation that at its peak provided 72 percent of the terror group’s revenue from natural resources in territory it controlled.

Documents reviewed by The Wall Street Journal that were taken in the raid that killed Sayyaf describe the terror group’s construction of a multinational oil operation with help from officious terror-group executives obsessed with maximizing profits. They show how the organization deals with the Syrian regime, handles corruption allegations among top officials, and, most critically, how international coalition strikes have dented but not destroyed Islamic State’s income.

The responsibilities of Abu Sayyaf extended beyond oil. In September 2014, he was given custody of Kayla Mueller, a kidnapped American aid worker. Ms. Mueller, who had been sexually abused by Mr. Baghdadi after being taken hostage in 2013, was killed about five months later, U.S. officials said.

The ties between ISIS and the Assad regime in a complex web of illicit oil transactions and payments made in U.S. dollars to allow for international money laundering explain much of why the Assad regime and Iranian forces have not targeted ISIS. For Assad, ISIS proved to be a reliable source of hard currency and an effective buffer against more moderate rebels backed by a coalition of Western nations including the U.S.

For Iran, the illicit partnership helped alleviate the financial burden of pumping money to keep the Assad regime propped up and allowed it direct its military forces against the less formidable rebel factions rather than the larger and better armed ISIS forces.

The connections prove the uncomfortable truth about the Iranian regime, which the Iran lobby has fought hard to keep out of the news, which is that it has helped maintain ISIS’s standing as the world’s leading terrorist group and has not sought to destroy it as claimed.

To this day, ISIS-controlled oil fields in Syria and Iraq still pump and sell roughly $1 million a day of oil with a significant portion of profits going to the Assad regime.

The Assad regime’s oil ties to the Islamic State have been well documented. At least two Syrian government officials, including a Russian-Syrian businessman named George Haswani, were sanctioned by the US last year for serving as middlemen between Assad and ISIS for oil deals.

The Daily Beast reported in December, meanwhile, that ISIS delivers both oil and natural gas to the regime. The report said the resources were transported via “midstream” service providers who move the resources from ISIS territory to government territory for profit.

“In exchange for gas, the regime provides utilities like electricity, which ISIS taxes accordingly,” wrote Matthew Reed, the vice president of Foreign Reports Inc., a Washington, D.C.-based consulting firm focused on oil and politics in the Middle East.

“At natural gas fields like those around Palmyra, which produce lighter liquid hydrocarbons in addition to gas, ISIS takes whatever it can turn into fuel,” he continued. “The gas goes west to Assad.”

The Journal only reviewed a small portion of the trove of documents captured in the raid to kill Sayyef. We can only assume even more incriminating material will still be revealed outlining the depth of cooperation between Assad and ISIS and by extension, Iran.