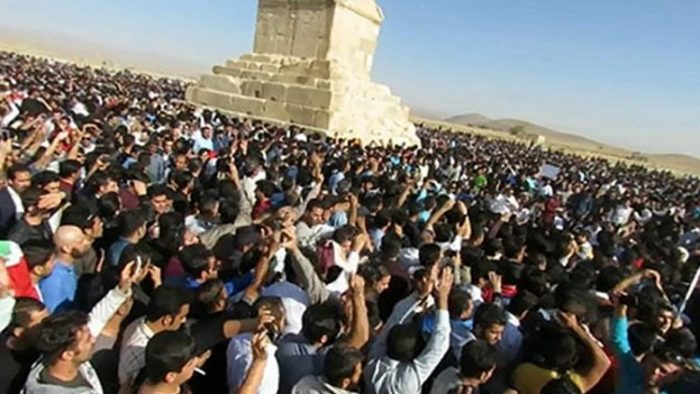 Iran Regime Tries Claiming Victory Where There is None

It has been interesting watching the reaction of Iranian regime leaders to Michael Aoun’s election to the largely ceremonial post of president of Lebanon. From the statements and self-congratulations coming out of Tehran, you would have thought the head of Hezbollah, Hassan Nasrallah was the one elected.

For the people of Lebanon, the results are more akin to a yawner. For Lebanese, who are used to the historical game of musical chairs, the election of Aoun is not so much ground breaking as much as it simply puts a warm body in the chair of the presidency after a two year vacancy.

Antoun Issa, senior editor at the Middle East Institute and a former Beirut-based journalist, appropriately captured the sentiments of most Lebanese when he coined the phrase “Kullun haramiyyeh” which means “they’re all thieves” in describing the most common sentiment on Lebanon’s streets from its vendors and waiters to students and doctors.

“So when Michel Aoun, the maverick general-turned-politician, achieved his long-held ambition of becoming president on Monday, most ordinary Lebanese reacted with indifference. The new president is just another name, another title, and another episode in the country’s endless — and ultimately meaningless — political drama,” Issa writes in Foreign Policy.

“To become president, Aoun, the country’s main Christian leader, struck a deal with his longtime opponent, Saad Hariri, head of the rival Sunni Future Movement. As part of the deal, Hariri will now become prime minister. But for the deal to work, it also needed (and duly received) the approval of arguably the most powerful man in Lebanon — Hassan Nasrallah, the head of Hezbollah,” he added.

“For ordinary people, this is all a game of musical chairs. Such is the disconnect between the country’s political class and the people that the average Lebanese can’t tell the difference between having a president and not having one. Prior to Monday, Lebanon had, in fact, been without a president for two years — but this fact could not be discerned on the streets of Beirut. President or no, Lebanon has had no effective governance for decades,” Issa said.

More importantly, the long-term strategy of Hezbollah is to so weaken the Lebanese government that it cannot provide basic government services such as education, food, healthcare and security and thus remain the dominant political and military power by dispensing these services to the country’s large Shiite population.

It’s a recipe that the mullahs in Tehran have practiced well by keeping the Iranian people dependent on the largesse of the Iranian regime and not allowing the full economic benefits of what should be a powerhouse economy trickle down to the people.

This Iranian regime game plan of claiming victory where there is none is a tried and true tactic. Even as the Iranian people march, protest and demonstrate against rigged elections, government corruption or shortages of food and job opportunities, the mullahs continue to flog the idea of victories to keep the perception alive they know what they are doing.

The problem with maintaining control with essentially a lie is that it is a fragile form of control subject to toppling even by small acts of defiance. For the Iranian regime this means it cannot tolerate even the smallest inklings of dissent, which is why the mullahs so ruthlessly pursue members of the Iranian resistance movement and arrest Iranians on the slightest provocations.

It is why even dress code violations such as women failing to wear a hijab or students posting selfies on Instagram are met with beatings and arrests.

This past Friday saw another of these instances when regime authorities arrested organizers of a rally held at the tomb of the ancient Persian King Cyrus the Great in Pasargadae, Iran.

Breitbart News previously reported that protesters chanted slogans like, “Iran is our country, Cyrus is our father,” “clerical rule is synonymous with only tyranny, only war,” and “freedom of thought cannot take place with beards,” a reference to the theocratic leaders currently in power.

According to Reuters, there was no indication as to how many of the event’s organizers had been arrested. However, a judiciary official reportedly said on Monday Iran’s intelligence and security forces have placed the organizers of the event under close surveillance and that they will face prosecution.

Prior to the October 28 protest, members of the regime’s Revolutionary Guard Corps (IRGC) and other Iranian authorities attempted to thwart the impending rallies by spreading rumors that officials had completely shut down the city, canceling tours to the site, sealing roads to Pasargadae, and shutting down the Internet.

Those actions did not deter the protesters, which consisted mostly of youth and individuals under the age of 35, from carrying out their rally.

The mere existence of such protests are dangerous for the regime, but also provide ample evidence for the rest of the world of the fragility of the mullahs’ rule which is why the international community needs to confront their extremism more forcefully.

Alex Carlile, a Liberal Democrat member of the United Kingdom’s House of Lords and co-chairman of the British Parliamentary Committee for Iran Freedom, challenged the United Nations to hold the regime accountable in an editorial in the Washington Times.

“The Iranian regime has imprisoned a British charity worker and sentenced her to five years’ imprisonment on bogus national security charges,” he writes. “The case of Nazanin Ratcliffe has shocked the British public as it has unfolded over the past six months, since she was arrested by regime officials when she attempted to fly back to England after taking her daughter, Gabriella, to visit her parents.”

“However, this is only the latest in a long line of human rights abuses by Tehran. Earlier this year, a leaked audio file provided further proof of the complicity of top-level regime members in a 1988 massacre, which killed 30,000 political prisoners, including juveniles and pregnant women,” Lord Carlile added.

Lord Carlile writes the main targets of these murders were members of the opposition movement People’s Mojahedin Organization of Iran (PMOI, or MEK), although the regime also executed relatives of members or casual supporters as well as other dissidents.

Nothing so incenses the regime than the continued efforts of the Iranian resistance to educate the world about these massacres and other human rights violations because they ultimately point out the hollow and empty “victories” the regime trumpets.