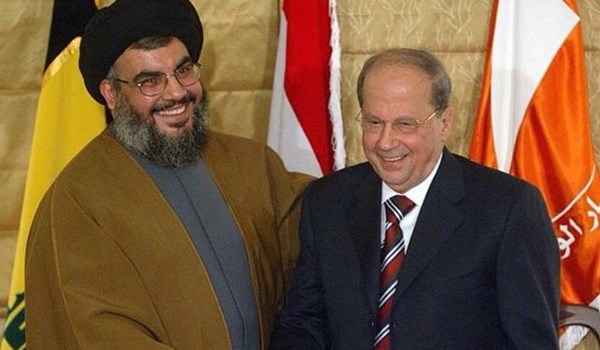 The Iranian regime has been busy building its own Islamic version of the old Soviet Union’s Warsaw Pact through the use of proxies and terror groups to fight civil wars in Syria, Iraq and Yemen. The template for such a tactic began in Lebanon where Iran’s chief partner, Hezbollah, has become the dominant political force after three decades of bloody sectarian conflict.

Lebanon took another step in aligning itself more closely with Iran when Lebanon’s lawmakers elected Michel Aoun, an Iran-backed politician and former general, as president Monday, ending more than two years the country has gone without a leader.

Aoun, 81, is an ally of Hezbollah, the Shiite militia and political party backed by Iran that has helped Syrian President Bashar Assad survive a five-year civil war on Lebanon’s border.

According to USA Today, the vote for Aoun, by 83 of parliament’s 127 members, shows Iran-backed political factions shouldered past those aligned with Saudi Arabia, replacing Syria as Lebanon’s chief foreign power broker.

It’s an important development since it adds to the growing sphere of influence the Iranian regime is trying to build in the Middle East as it tries to set itself apart as the dominant power in the area; overtaking Saudi Arabia.

It is also an attempt by the mullahs in Tehran to send a message to other countries in the region to either cozy up to Iran or face possible repercussions. But far from being a clear-cut victory for Iran, Lebanon sought to navigate a narrow path and not serve a pawn solely for Iran.

Saad Hariri, a pro-Western and Saudi-oriented politician, formally endorsed Aoun last week after failing to garner enough support for the presidency. In return, Aoun is expected to appoint Hariri prime minister in a power-sharing move aimed at keeping both Saudi Arabia and Iran from gaining total leverage within Lebanon.

Of course, Iran tried to portray the election as a vindication for its policies. Aoun’s election drew immediate praise from a top adviser to Iran’s top mullah Ali Khamenei.

The adviser, Ali Akbar Velayati, described the choice as a victory for Iran and its allies in Lebanon, because the Lebanese president is “a very significant ring in the chain of the Islamic resistance,” according to Iran’s government-owned Tasnim News Agency.

The election of Aoun to the presidency, instead of the much more political powerful prime minister post also makes Iran’s claims of victory ring slightly hollow, but the mullahs are willing to trumpet any positive news when so little good news is coming across right now as a stagnant economy at home stirs unrest and the colossal drain of supporting three wars has Iran clamoring for lifting more sanctions and even nabbing a few more American hostages in the blind hope of shaking down more ransom money.

The efforts by Iran to influence its neighbors fly in the face of warnings issued by regime leaders against foreign nations from intervening in the region.

In a meeting with Cypriot Parliament speaker Demetris Syllouris, Iranian regime parliamentary speaker Ali Larijani censured foreign countries for “meddling” in the fate of nations in the Middle East in what could be classified as one of the bigger lies uttered by the mullahs recently.

In an usual twist of irony for the regime, while Larijani was warning against foreign intervention, Hossein Salami, the deputy commander of Iran’s Revolutionary Guard Corps, told a crowd of Basij paramilitaries that regime forces recently demonstrated “its capability of not recognizing the red lines in pursuing and punishing the regime adversaries.”

He bragged on the expansion of the Islamic state’s boundaries from the Red Sea to the Mediterranean, vowing that the “defenders of the holy shrines” forces would crash Tehran opponents anywhere in the world in a definitive statement on the regime’s territorial ambitions.

“You can see how our borders expanded reaching the Red Sea and the eastern Mediterranean, due to the sacrifice of our martyrs,” he added according to Tasnim news agency.

So even while the regime complains about foreign intervention, it sees for itself a blank check to meddle in the affairs of its neighbors and even recognizes its own mandate to push forward its own boundaries in pursuit of a larger swath of territory.

All the while the administration of Hassan Rouhani is making changes to Iran’s media laws to further muzzle journalists from any possible dissent and tighten the screws on criticism.

His administration reportedly plans to do this through two bills: one designed to ultimately replace the current Press Law and the other to create a state media commission. While the new Press Law may appear relatively similar to the current one, it leaves more room for interpretation when determining if someone has committed an offence. This could make it easier for prosecutors or judges with political motivations to silence journalists or newspapers through arbitrary charges, according to Global Voices.

The proposed Media Affairs Commission bill to “oversee the journalism profession” would make journalists and media agencies more directly accountable to the government. The Commission will be responsible for issuing permits to journalists, draft a Journalism Ethics Code and ensure “high moral standards” in the media. At present, local Iranian journalists do not need permits to work for publications, in contrast to foreign journalists who go through a rigorous accreditation process through the Ministry of Culture and Islamic Guidance’s foreign press department. Only special accreditation is applied for journalists through their new agencies to attend official settings such as Parliament, or speeches by the President and Ministers.

Hardline politician Hossein Entezami, well known for repressing media freedoms, reportedly will take a leading role in the Commission. His appointment to this post, by the Rouhani administration, is leading to feelings of disquiet for freedom of the press in Iran.