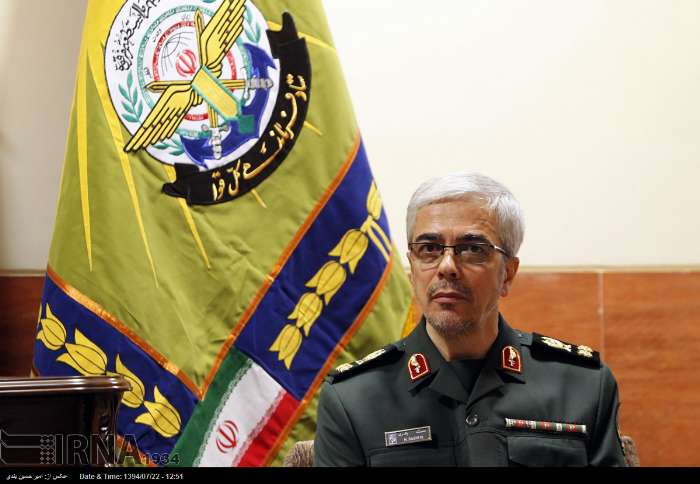 Iran Regime Hands Military Over to Extremist While Seeking Cash

In an unexpected development late last month, the Iranian regime’s Supreme Leader Ali Khamenei announced the promotion of Maj. Gen. Mohammad Bagheri as chief of staff of Iran’s armed forces. A shadowy figure from the country’s vaunted Islamic Revolutionary Guards Corps (IRGC), Bagheri has been tasked with overseeing all branches of Iranian regime’s armed forces, including the IRGC, the regular military (Artesh), and the police.

Bagheri has an extensive military background, including serving as the IRGC’s chief of intelligence and information operations, which has put him at the forefront of coordinating the regime’s work with terrorist groups such as Hezbollah, as well as maintaining the network of proxies throughout the region including Shiite militias in Iraq and Houthi rebels in Yemen.

Importantly according to a piece in the National Interest, Bagheri belongs to a clique of IRGC officers who form the organization’s core leadership, sitting alongside the likes of Mohammad Ali Jafari, the current commander of the IRGC, and Qassem Soleimani, the famed general directing the IRGC’s expeditionary wing, the Quds Force.

Composed of just a few members, this clique shares deep ties dating back to the Iran-Iraq War, and is hugely influential in shaping the organization’s trajectory. Neither is it averse to intervening in domestic politics: members of this clique, including Mohammad Bagheri, signed a letter in 1999 to then president of the mullah’s regime, Mohammad Khatami, threatening a military coup if Khatami did not crush a growing student rebellion. Notably, Rouhani the current “reformist” president was the Iranian regime’s National Security Advisor at the time and was at the forefront of suppressing the student movement.

This appointment is not some simple bureaucratic reshuffling. It represents a significant change in regime policy to put the nation’s military and police services firmly in the hands of the IRGC and away from the regular army. It places the most politicized unit of the military, which already controls wide swathes of Iran’s economy, at the top of the pyramid in terms of raw power.

The sharp end of Iran’s interventions in the Middle East has been the IRGC, which to date has lost hundreds of fighters and tens of commanders across the region. In Iraq, the IRGC has overseen the establishment of the Popular Mobilization Forces (PMF), an umbrella organization spanning hundreds of predominantly Shia militias that fights alongside Iraq’s regular military and often commands its own operations.

The IRGC provides training, weapons and frontline commanders to assist the PMF, which is dominated by militias that have pledged personal fealty to Iran’s supreme leader and not the nation as a whole; an important distinction.

The moves includes the outlining of a modernization plan by Bagheri to upgrade the Islamic state’s military which has already begun with an expensive shopping list of Russian military hardware, including new fighter jets, anti-ship missiles and advanced anti-aircraft batteries.

The costs of that upgrade may also explain why the regime has been complaining loudly of the lack of access to U.S. currency exchanges and the reluctance of foreign banks to handle Iranian transactions due to the continued threat of economic sanctions put in place by the U.S. over human rights violations and support of terrorism and not tied to last year’s nuclear agreement.

The fact that the regime has opted to use the unfrozen funds it has access to as part of the nuclear agreement to help fund its proxy wars and not to help spur the Iranian economy says loads about the intentions of Khamenei and the other ruling mullahs.

Instead, the regime has sought to place blame on the still anemic economy on the U.S. and the inability to get fresh cash. This has helped whip the Iran lobby into a lather writing editorials calling the cash crunch a “new sanction” and a threat to the nuclear agreement, which is silly when we consider the agreement has been a failure in stemming the regime’s nuclear and regional ambitions.

One example has been the near constant drumbeat of posts on regime loyalist blog Lobelog.com which put out a Q&A with noted regime supporter retired Amb. Peter Jenkins of the British Diplomatic Service, who blamed the Obama administration for doing nothing to help Iran access its financial windfall.

He also raised the issue of presidential candidate Hillary Clinton’s past support for some of the toughest sanctions ever placed on Iran and whether or not she would continue on that path if elected.

“I am concerned by Ms Clinton’s uncritical liking for the current Prime Minister of Israel and his right-wing government. I am also concerned by the hawkish nature of her record on foreign policy issues, and I am unsure that she will feel any inclination, still less obligation to protect the legacy of President Obama, from some of whose policies she has sought to distance herself,” Jenkins said.

The realization is probably growing on the mullahs that no matter who gets elected in November, the U.S. policy of appeasing the regime may be coming to an end which is spurring their frantic efforts to unlock the billions in cash they so desperately need.

It is a point former president Bill Clinton reinforced in his speech during Tuesday’s nomination of his wife at the Democratic National Convention, where he emphasized her role as Secretary of State in getting the toughest sanctions placed on Iran during her tenure.

“As secretary of state, (Hillary Clinton) worked hard to get strong sanctions against Iran’s nuclear program” and “got Russia and China to support them,” Bill Clinton said.

We can only hope as president, should she prevail, she continue on that same path.