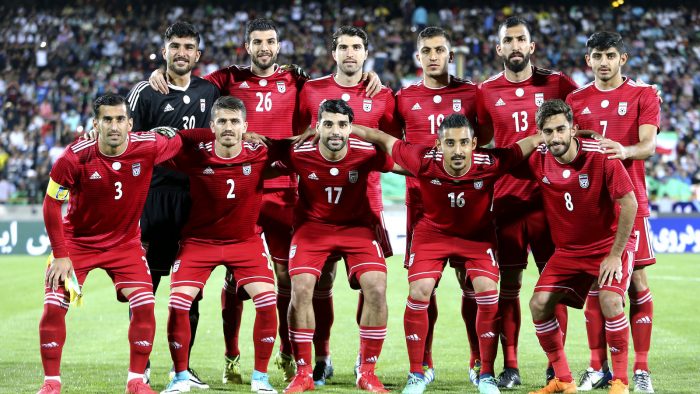 Iran’s team poses for a team photo prior the international friendly soccer match between Iran and Uzbekistan at the Azadi Stadium in Tehran, Iran, Saturday, May 19, 2018. (AP Photo/Ebrahim Noroozi)

The World Cup is about to begin in Russia with the world’s sports stage about to be taken up by soccer teams from around the world. All of them will be clad in gear provided by leading sports manufacturers, but one of the world’s biggest, Nike, will not be providing cleats for the Iranian regime’s soccer team.

On the eve of facing its first opponent in Morocco, Iranian players won’t be wearing Nike footwear after the U.S.-based sporting giant announced it would no longer supply the Iranian team because of new economic sanctions put in place by the Trump administration.

“The sanctions mean that, as a U.S. company, we cannot provide shoes to players in the Iran national team at this time,” Nike said in a statement.

The decision was accompanied by new economic sanctions. The U.S. Treasury can impose a penalty of up to $1 million and 20 years in prison against any company or person who violates the sanctions.

Predictably the Iran lobby spewed with rage at the perceived injustice with the National Iranian American Council leading the charge.

“I haven’t gotten clarity on what legal basis [Nike] is using to say this. They should reference what part of the sanctions they are talking about since technically they’re not selling anything,” said Trita Parsi, head of the NIAC.

The next incoming head of the NIAC, Jamal Abdi, chimed in as well in a press release issued by the NIAC.

“This flies in the face of any claims by the Trump Administration that it is targeting the Iranian government and not the Iranian people. We are well aware that the President’s National Security Advisor, John Bolton, has openly called for the U.S. to take steps to target even sports exchanges with Iran and may relish this shameful situation. Nothing symbolizes the wishes and hopes of the Iranian people more than their national soccer team. And nothing unifies them more than when that team is unjustly targeted and insulted,” Abdi said.

It shows just how far the influence of the Iran lobby has fallen now that President Trump has withdrawn from the Iran nuclear deal and has placed North Korea negotiations front and center of the global debate when the NIAC is reduced to begging for shoes for the regime’s soccer team.

It’s worthwhile recalling some of the lowlights for the Iran lobby and regime when it comes to sporting events which the Parsi and Abdi have conveniently forgotten about; namely, that regime has historically banned women from even attending and watching sporting events such as soccer, swimming, and wrestling.

Many Iranian women who are fans often resort to wearing beards and disguises to gain entry and cheer on their team. If they are discovered, it often leads to jail time.

Since 1979, women athletes have been subject to strict requirements when competing in Iran or abroad, with the Iranian Olympic Committee stating that “severe punishment will be meted out to those who do not follow Islamic rules during sporting competitions”. The committee banned women athletes from competing in Olympic events where a male referee could come into physical contact with them. At 1996, 2000, 2004 and 2008 Summer Olympics combined, a total of six women represented Iran.

Dorsa Derakhshani, 19, an Iranian chess grandmaster champion who grew up in Tehran, was forced out for choosing not to wear a hijab and now plays for the U.S. Chess Federation.

In many cases, especially women, the Iranian regime has often chased away its best and brightest in favor of maintaining the archaic nature of the theocracy’s laws.

These issues are never mentioned by the Iran lobby nor do they earn condemnation by the NIAC, which instead chooses to attack the issue of sanctions, by using the plight of the men’s soccer team as a PR tool.

The underlying concern for the Iran lobby is what the refusal by Nike represents, which is worry that the new sanctions imposed by the Trump administration will be deeper, harder and more effective than those that originally drove the Iranian regime to the nuclear bargaining table in the first place.

If sporting manufacturers are opting to stay from potential sanctions for participating with Iran, what does that say about heavy industries the regime’s economy and military depend on such as electronics, steel, petroleum, chemicals, and manufacturing?

The worry for Parsi and Abdi is that if other companies, including those in Asia and Europe, take these sanctions by the Trump administration more seriously, the Iranian regime could soon find its faltering economy knocked flat on its back which would pose significant threats to the rule of the mullahs in light of widening protests by ordinary working-class Iranians over the terrible economic conditions they are now facing.

While Abdi tries to frame the debate around noted hawk John Bolton, the reality is that he worries that the tough stance President Trump is taking, especially in recent trade talks, demonstrates his willingness to go after any company that engages in trade with Iran.

This is why regime leaders such as Hassan Rouhani have worked hard in an effort to preserve economic ties with the European Union following the U.S. pullout from the nuclear deal, but that effort looks increasingly like a failure as more and more private companies reassess their potential risk and weigh the disadvantage of doing business with the Iranian regime against the potential for crippling sanctions.

One example of the impact of U.S. sanctions was in the case of Chinese telecommunications giant ZTE Corp which was on the verge of extinction because of sanctions stemming from its illegal trading with Iran and North Korea.

Only after President Trump ordered a review and ZTE paid a whopping $1.4 billion fine and turned over its management and board did it manage to cling to life.

The example was unmistakable for any company deciding to do business with the Iranian regime, even more, a shoe manufacturer.