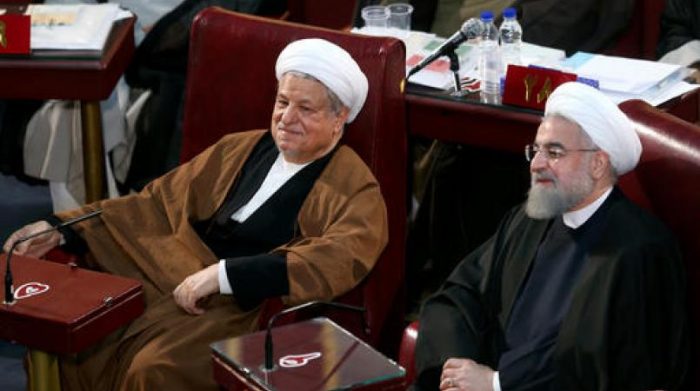 Get it Right: Iran’s Rafsanjani Was Not a Moderate

Ali Akbar Hashemi Rafsanjani died and many Western media outlets breathlessly reported that his death would be a devastating blow to Iran’s “reformers” and how that moderate movement had lost one of its lions.

Let’s get something straight right off the bat: Rafsanjani was not a reformer or moderate. He was a staunch leader of the Iranian regime from the very beginning as a disciple of Ruhollah Khomeini and led Iran’s armed forces during its bloody war with Iraq and as president.

His long record is often overlooked by most journalists who are too enamored with the image of a pop-culture icon of change and reform and buy into the narrative that Rafsanjani was a man valiantly leading the fight against the obstructionist Islamists and hardcore neo-cons.

The headline from the New York Times was typical of this idiotic adoration for a man who oversaw the growth of the Iranian regime and committed various murders, assassinations and attacks against political opponents and dissidents to keep it firmly in his hands and his fellow mullahs.

The distinction of calling Rafsanjani a moderate is like making a distinction between Hermann Goering and Henrich Himler in Nazi Germany. There is little difference and both collaborated to make the Nazi’s control of Europe a long and bloody one.

Over the past 38 years, both under Khomeini and in later years, Rafsanjani played a critical role in suppression at home and export of terrorism abroad as well as in the quest to acquire nuclear weapons. Though portrayed by some Western media outlets as a “pragmatist” or “moderate,” during his long career he was associated with some of the regime’s most egregious actions, including mass-casualty terror attacks and the assassinations of exiled dissidents.

Heshmat Alavi, an Iranian human rights activist, took the characterizations of Rafsanjani to task in an editorial in Forbes.

Of course, Rafsanjani was definitely considered part and parcel to the religious establishment in Iran, bearing in mind his special ties to regime founder Ruhollah Khomeini, who died back in 1989. However, appeasement advocates in the West dubbed him as a “pragmatic conservative” willing to work with the outside world, especially the “Great Satan,” he added.

While Rafsanjani’s power diminished noticeably in recent years, he continued to enjoy a final post as chief of the Expediency Council, assigned to seemingly resolve disputes between the Guardian Council and parliament. The former is an ultra-conservative body closely knitted to Khamenei and known to screen all electoral candidates according to their loyalty to the regime establishment.

Reuel Gerecht and Ray Takeyh detail Rafsanjani’s long and often bloody history in an editorial in the Washington Post pointing out that during his presidency (1989–1997), Rafsanjani revamped the Atomic Energy Organization, sought to lure Iranian scientists from abroad and went on a shopping spree for dual-use nuclear technologies.

Make no mistake, Rafsanjani was no egalitarian for the people. He accumulated a vast mountain of wealth for himself and his family amounting to billions.

“One brother headed the country’s largest copper mine; another took control of the state-owned TV network; a brother-in-law became governor of Kerman province, while a cousin runs an outfit that dominates Iran’s $400 million pistachio export business; a nephew and one of Rafsanjani’s sons took key positions in the Ministry of Oil; another son heads the Tehran Metro construction project (an estimated $700 million spent so far),” states a 2003 Forbes analysis.

The report also mentions billions stashed by the Rafsanjanis in overseas bank accounts.

“Some of the family’s wealth is out there for all to see. Rafsanjani’s youngest son, Yaser, owns a 30-acre horse farm in the super-fashionable Lavasan neighborhood of north Tehran, where land goes for over $4 million an acre. Just where did Yaser get his money? A Belgian-educated businessman, he runs a large export-import firm that includes baby food, bottled water and industrial machinery.”

More importantly, Rafsanjani represents one of the last leaders of the revolution and as such the power stemming from that iconic moment now falls to the oldest living leaders in the Islamic state such as Ali Khamenei and his handpicked leaders such as Hassan Rouhani.

Power in the Iranian regime does not flow down as much as it flows laterally among a small cadre of committed religious leaders who jealously guard their financial fortunes as much as the rigid Shiite ideology of the state.

So while media outlets are analyzing the impact this will have on Iran’s “moderates” the more important and appropriate question is how to reintroduce and empower true moderates back into Iranian politics and not simply settle for calling regime leaders “moderates” because they happen to be less brutal than others.

Is it a sign of moderation when one mullah advocates imprisonment for a dissident while another calls for a public hanging?

That is the mistake media outlets are making with Rafsanjani.