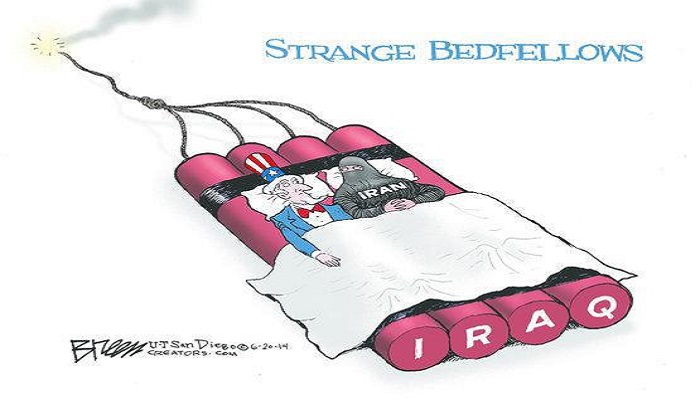 Recent article published in US News and World report, opinion page, challenges the views offered by some pro-Iran advocates who are suggesting to collaborate with Iran in fighting against ISIS.

The article offers a very informative background to the roots of the problem in Middle East and offers a more effective solution.

You can read the entire article below:

As the gathering whirlwind of religious extremism masquerading as Islam leaves a trail of devastation in the Middle East and threatens large parts of the globe, a key question lingers about the role of Iran. Some observers – following the tired maxim that “the enemy of my enemy is my friend” – argue that the threat of the Islamic State group transcends policy differences between Tehran and the West and should allow for collaboration against a common enemy. This view is naive and dangerous. In truth, Tehran and the Islamic State group complement and strengthen each other – ideologically as well as tactically on the field of battle.

The Islamic State group is not the only organization that insults the name of our great faith. Since Islamic fundamentalism emerged as an international political force with the establishment of the clerical regime in Iran in 1979, the world has witnessed barbaric acts like stoning, limb amputations, eye-gouging and the massacre of political prisoners in the name of the so-called Islamic Republic. Export of violent fundamentalism has since become the regime’s distinctive feature, earning it the U.S. State Department’s designation as the world’s number one state sponsor of terrorism.

Iraq has always been the mullahs’ gateway to regional domination. That is why they perpetuated a disastrous eight-year war with Iraq, proclaiming that the road to liberating Jerusalem passed through Karbala.

Tehran got a historic opportunity to realize its ambitions after the 2003 U.S. invasion of Iraq opened the gates of Baghdad. In subsequent years, the United States committed a strategic blunder by keeping then-Prime Minister Nouri al-Maliki in power in Iraq, beginning a pro-Tehran tilt that culminated with the wholesale abdication of the country’s politics and security to Iran especially when American forces withdrew in 2011.

A case in point is America’s silence in the face of recurring massacres against members of the Iranian opposition, the Mujahedeen-e-Khalq, or MEK, in the Ashraf and Liberty camps in Iraq. These men and women were given written commitments by Washington assuring their safety. The survivors still languish in inhumane conditions, while Tehran is still intent on wiping them out.

Western – and particularly U.S. – inaction against Assad’s atrocities and the eight-year-long backing of al-Maliki significantly aided the rise of extremism. And now after wreaking havoc in Syria, Iraq, Lebanon and Palestine, Tehran has targeted Yemen, inundating it with mullahs and Iranian Revolutionary Guards Corps forces, effectively occupying large swaths of the country. It is no small irony that this expansion of the regime’s destructive presence in the region comes at a time when the mullahs are more cornered and vulnerable than ever before.

In the nuclear arena, Tehran’s rulers are at an impasse as the Nov. 24 deadline for a deal draws near. If they abandon their dream of obtaining a nuclear weapon, their regime will implode. And if they choose defiance, they cannot escape confrontation with the international community.

Al-Maliki’s ouster from power undercut Tehran’s eight years of investment in Iraq; its crucial fulcrum in the region thus disintegrated, curbing its plans for regional domination.

A year into Hassan Rouhani’s presidency, internal rifts have deepened. It is increasingly apparent that the Iranian regime’s only path to survival is to terrorize an embittered population. According to the latest report on the human rights situation in Iran by U.N. Secretary General Ban Ki-moon, “the application of the death penalty, including in relation to political prisoners and juvenile offenders, has increased.”

To overcome the current crisis and to rescue the region from more bloodshed and devastation by Islamic fundamentalists, a fresh approach is imperative:

First, defeating terrorism and extremism in the region requires, in addition to taking the fight to the Islamic State group, the eviction of the Iranian regime and its militias from Iraq. Tehran is the main source of the problem and cannot be part of any solution. Engaging Tehran would inexcusably throw a lifeline to an otherwise sinking regime.

Second, Tehran should not be allowed to exploit the Iraqi crisis either to delay a final nuclear deal or to impose its own conditions. Any agreement lacking the implementation of U.N. Security Council resolutions, a halt in uranium enrichment and snap inspections would effectively permit the regime to develop a nuclear weapon.

Third, Islamic fundamentalism in our time took root in Iran, and it must be uprooted in Iran. Standing with the Iranian people’s struggle against religious dictatorship and with the anti-fundamentalist dissidents inside Iran and abroad, as well as ensuring the safety and security of the residents of Camp Liberty in Iraq, are prerequisites for combating religious fundamentalism throughout the region.

Islamic fundamentalism can be defeated only by genuine Islam, a religion that promotes tolerance, advocates gender equality, upholds democracy, human rights and social justice and embraces the separation of religion and state. The experience and courage of those who espouse these ideals and are willing to stand up to extremists – be they in Iran, Iraq or Syria – should serve as our guide.

Maryam Rajavi is the president-elect of the Paris-based National Council of Resistance of Iran, which is seeking the establishment of a democratic, secular and non-nuclear republic in Iran.