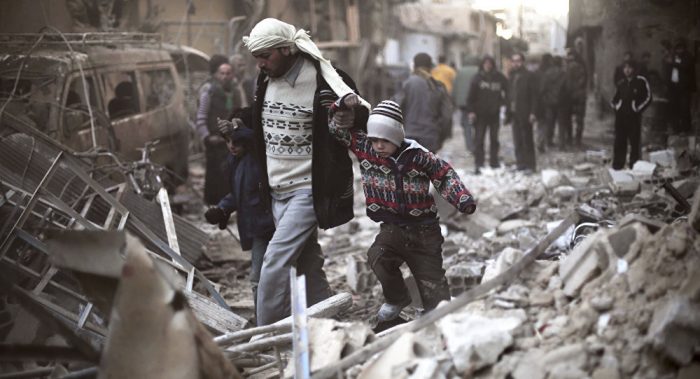 Russia, Turkey and the Iranian regime jointly announced the establishment of so-called “de-escalation zones” in Syria in which the Assad regime would allegedly halt military flights over designated areas according to the Washington Post.

As officials from the three countries — Russia, Iran and Turkey — that back rival sides in the conflict signed the agreement at Syria talks in Kazakhstan on Thursday, some members of the Syrian opposition delegation shouted in protest and walked out of the conference room in Astana, the Kazakh capital.

The opposition is protesting Iranian regime’s participation at the conference and role as a guarantor of the agreement, accusing it of fueling the sectarian nature of the conflict that has killed some 400,000 people and displaced half the country’s population.

“Iran is a country that is killing the Syrian people and the killer cannot be the rescuer,” said Abu Osama Golani, a rebel commander who attended the gathering in Astana.

The Iranian regime’s role in the carnage and escalation in Syria makes it a dubious guarantor of safety and security, especially since it was Iran that begged Russia into intervening in the war in a last-ditch effort to save the Assad regime from being toppled by opposition forces.

The Syrian government has said that although it will abide by the agreement, it would continue fighting “terrorism” wherever it exists, code for most armed rebel groups fighting government troops.

It’s the reason why a previous cease-fire agreement signed in Astana on Dec. 30 eventually collapsed. Other attempts at a cease-fire in Syria have all ended in failure largely because of Iran and Syria’s willingness to continue attacking rebel-controlled areas, including those with large civilian populations.

Past efforts at protecting “safe zones” have had a pretty dismal record, largely because combatants are still allowed to engage in attacks without serious repercussions.

“Iran’s activities in Syria have only contributed to the violence, not stopped it, and Iran’s unquestioning support for the Assad regime has perpetuated the misery of ordinary Syrians,” said U.S. State Department spokeswoman Heather Nauert.

The problems in Syria are only one aspect of the larger difficulties of Iranian influence and activities throughout the region and as such requires a more comprehensive solution attacking the instability at its source: Iranian regime itself.

When Iran attempted to launch a cruise missile from a “midget” submarine earlier this week, Pentagon officials saw more evidence of North Korean influence in the Islamic Republic – with intelligence reports saying the submarine was based on a Pyongyang design, the same type that sank a South Korean warship in 2010, according to Fox News.

According to U.S. defense officials, Iran was attempting to launch a Jask-2 cruise missile underwater for the first time, but the launch failed. Nonproliferation experts have long suspected North Korea and Iran are sharing expertise when it comes to their rogue missile programs.

Only two countries in the world deploy the Yono-class submarine – North Korea and Iran. Midget subs operate in shallow waters where they can hide.

“When those midget subs are operating underwater, they are running on battery power—making themselves very quiet and hard to detect,” said a U.S. defense official who declined to be identified.

Perhaps most worrisome for the United States is that Iran attempted this latest missile launch from a midget sub Tuesday in the narrow and crowded Strait of Hormuz, where much of the world’s oil passes each day, Fox News said.

Over a year ago, Iran fired off a number of unguided rockets near the USS Harry Truman aircraft carrier as she passed through the Strait of Hormuz in late December 2015. The U.S. Navy called the incident “highly provocative” at the time and said the American aircraft carrier was only 1,500 yards away from the Iranian rockets.

In July 2016, two days before the anniversary of the nuclear agreement between Iran and world powers, the Islamic Republic attempted to launch a new type of ballistic missile using North Korean technology, according to multiple intelligence officials.

Even with this overwhelming evidence of collusion between the two rogue nations, some Iran lobby apologists continue to make the case of appeasement. In this case, Robert S. Litwak, the vice president for scholars and the director of international security studies at the Woodrow Wilson International Center for Scholars in Washington, D.C., argued that an “Iran-style nuclear deal” with North Korea was a viable solution.

Buying into the false narrative of moderation within the Iranian regime, Litwak argues that making a diplomatic effort to cap North Korea’s nuclear capability—similar to the Iran nuclear deal—is the “least bad” option.

Unfortunately for Litwak, history demonstrates that this least bad option stinks to high heaven and has done nothing to curb Iran’s regional ambitions, thirst for bloodshed or improved its dismal human rights record.

A repeat of the Iran deal for North Korea would no doubt similar disastrous results.