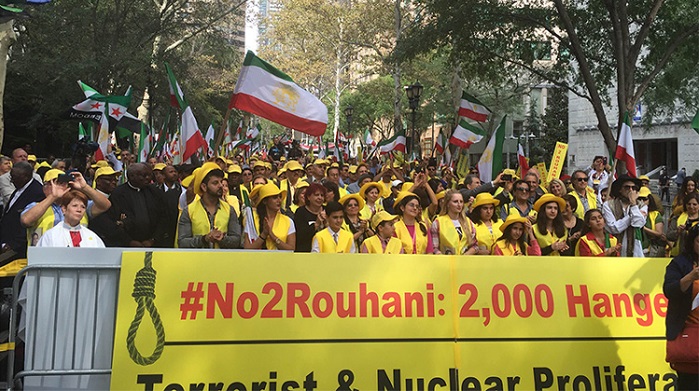 What is a Washington Post Hostage Worth to Iran Regime?

The world was treated to a third straight year of verbal nonsense from Hassan Rouhani, the handpicked leader of the Iran regime, who delivered his third speech to the United Nations General Assembly in what is fast becoming an exercise in linguistic firebombing as he lambasted the U.S., the West in general, Saudi Arabia and just about everyone else on the regime’s “Death to…” chant playlist.

Rouhani in his speech that managed to give implicit approval of the 9/11 attacks, called for the destruction of Israel, regime change in Saudi Arabia and permanent elevation of Iran as a global superpower all in one fell swoop.

It was noteworthy that Rouhani did not acknowledge Iran’s role in the spread of terrorism throughout the region through its support of Hezbollah in Lebanon and Syria, or its role in the death and maiming of thousands of Americans by training and equipping Shiite militias in Iraq and he failed to confront the truth of Iran’s facilitation of a global refugee crisis with over four million Syrians displaced because of the Syrian civil war.

Rouhani did spend much of his speech denouncing Saudi Arabia for the tragedy during the hajj stampede that killed a reported 167 Iranian pilgrims and calling for an international investigation. He neglected to mention Iran’s support of Houthi rebels who overthrew the Yemen government and sparked a shooting war with Saudi Arabia and other Gulf States that led to high seas showdowns in the Straits of Hormuz as Iran threatened international shipping lanes.

The Iran regime’s role in supporting the Syrian civil war and keeping Bashar al-Assad in office was of paramount importance to Rouhani as he went on CNN to make the blanket assertion that any hope for defeating ISIS and terrorism in general rested in keeping Assad in office.

“In Syria, when our first objective is to drive out terrorists and combatting terrorists to defeat them, we have no solution other than to strengthen the central authority and the central government of that country as a central seat of power,” Rouhani said.

It is a remarkable assertion since Assad has been found guilty of wantonly killing his own people with chemical weapons and using barrel bombs to wipe out entire civilian neighborhoods. At Iranian regime’s urging and through its military, Assad has specifically targeted moderate and Western-backed rebel forces, leaving ISIS and other extremist Islamic groups largely untouched in an effort to split the opposition.

Rouhani boosting Assad as a counter-weight to terrorism is like asking a candy manufacturer to promote weight loss programs.

Rouhani went a step further in his CNN interview where he compared opponents of the nuclear deal – specifically Republican presidential candidates who have vowed to tear it up if elected – to Saddam Hussein who launched the Iran-Iraq War.

Far from being the reform-minded advocate the Iran lobby has sought to portray, Rouhani has instead brought a vitriol, while subtle, every bit as incendiary as the much reviled Mahmoud Ahmadinejad.

The height of absurdity by Rouhani was reached when he again proposed the idea of a prisoner swap between the U.S. and regime; trading Iranian-American hostages such as Washington Post reporter Jason Rezaian, Christian pastor Saeed Abedini and former Marine Amir Hekmati for several Iranians convicted of arms trading and smuggling in nuclear components for Iran’s nuclear program – which Rouhani coincidentally denied ever existed.

“There are a number of Iranians in the United States who are imprisoned, who went to prison as a result of activities related to the nuclear industry in Iran,” Rouhani said. “Once these sanctions have been lifted, why keep those folks in American prisons? So they must be freed.”

So what are Jason Rezaian and other hostages worth to the Iran regime? Apparently at least 19 Iranian agents convicted of nuclear and weapons smuggling.

The proposed swap linked to convicted arms smugglers was condemned by the Washington Post and family members of the American hostages.

“Not until they’re on American soil can I trust what they say,” said Naghmeh Abedini, wife to Saeed Abedini. “My husband is not collateral. He’s a husband, a father, and he’s broken no law. They’re trying to barter his exchange for 19 criminals. It’s unbelievable. The Iranian government is no different than the government that held Americans hostage in the 1970s.”

Not surprisingly, Trita Parsi, head of the Iran lobby’s National Iranian American Council, tried to make the comparison U.S. airstrikes against ISIS in Syria were akin to bombing Oklahoma without approval of the U.S. government. He neglected to note that in Syria’s case, the government has been condemned as illegitimate and a mass killer by the world and embroiled in a civil war where Syria has invited in foreign governments such as Iran and Russia to kill its own people who are revolting.

Then again, lack of logic has never stopped Parsi from making ridiculous claims. He made the ultimate leap of fantasy when he authored an editorial claiming that the recent visit by Pope Francis to the U.S. could help defeat terror by persuading the U.S. to adopt a more accommodating tenor towards radicalized states such as Iran.

“What has fueled the Syrian crises more than anything else is the false illusion on all sides that a decisive military victory is around the corner,” Parsi said.

An appropriate sentiment if it was only applied to Iran’s military support of Assad, but in this case, Parsi only meant the rebel forces fighting to topple Assad and the rest of the world trying to get the tyrant out.

It was noteworthy that Rouhani’s appearance wasn’t all flowers and songbirds as thousands rallied outside of the UN to protest Rouhani’s speech; with delegations from Syria, Yemen, and Iranian dissidents talked about the abuses and injustices meted out since Rouhani took power.