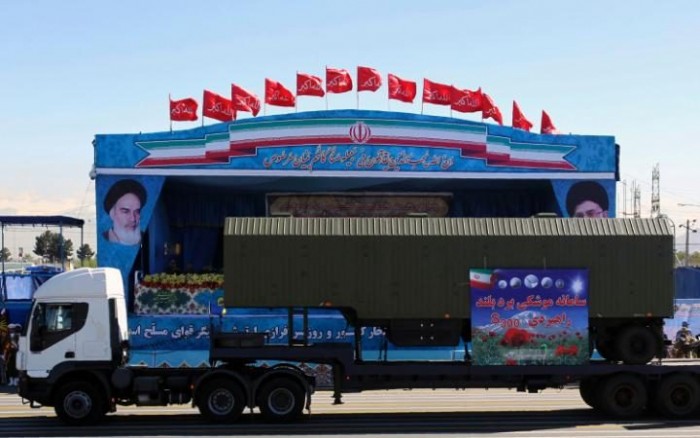 The Iranian regime held its annual Army Day parade as a showcase to pose itself as a mighty power in the region, but more importantly for the mullahs it provided an opportunity to show off parts of the long-awaited new S-300 air defense system from Russia.

While the advanced anti-aircraft missiles were originally ordered by Iran in 2007, their delivery was held up due to the imposition of sanctions related to Iranian regime’s violations concerning the development of nuclear weapons. Only after the nuclear agreement was reached last year was the delivery allowed to go through.

The delivery of the missile system is significant since it instantly brings the regime’s air defense to a much more modern and sophisticated level; a major issue for the mullahs and Revolutionary Guard since without it, any effort to restart its nuclear program would be subject to air attack by the U.S. and its allies.

The fact that the mullahs pushed hard to remove weapon systems such as this and the development of new ballistic missiles from the nuclear negotiations spoke volumes of their determination to upgrade their military capabilities far beyond where they stand today, particularly since they see this the only path to survival of the vast internal discontent.

According to pictures published by the semi-official ISNA news agency, S-300 missile tubes and the radar equipment were shown during the military parade held in southern Tehran.

Iran and Russia are also in talks on a sale of the advanced Sukhoi SU-30 fighter, another proposal criticized by the U.S. The regime’s current air force fleet dates from the pre-revolutionary era of the former Shah.

Speaking at Sunday’s parade, Hassan Rouhani insisted Iran’s plans to upgrade its military capabilities were defensive in nature, referring to the worst conflicts in the Middle East.

“Our military, political and economic power is not directed against neighboring countries and the countries of the Islamic world.

“When Baghdad was threatened by terrorists, the Islamic Republic of Iran responded to the call of the people, the army and the Iraqi government to defend Baghdad and the holy places,” he said, referring to the surge of the ISIL group in June 2014.

The argument he makes is similar to those consistently made by the Iran lobby from groups such as the National Iranian American Council which has sought to portray the Iranian regime as some sort of dedicated freedom fighter against Islamic extremism. The only difficulty with that portrayal is that Iran’s mullahs are the ones spreading it, not the other way around.

The beefing up of its military capability, including the multiple test launches of new ballistic missiles, comes at a time when the Iranian regime is also ramping up its military presence in Syria in support of the regime of Bashar al-Assad, except now the Iranians are not even trying to hide their deepening presence even as they pretend to advocate for peace talks.

Fearing that Russia may side with the U.S. and approve the removal of Assad from power, the Iranian government is now, more than ever, investing in propping up the regime’s dwindling army and air force.

“They [the Iranians] saw it as an opportunity to move closer to the regime,” one U.S. official told the Financial Times.

The Russian military pullback announced last month threatens Tehran’s position not only in Syria, but in the region. If Assad is ousted, Iranian military presence in the country will be diminished and Iran will no longer be able to present itself as a player in the region.

Iranian regime officials have in number of times reiterated that Syria is their front line and if they don’t fight the enemy in Syria, soon they have to do it in Tehran, referring to the strategic importance of Syrian dictatorship for the Ayatollahs in Iran. That’s why Iran is deploying more troops to Damascus. Those deployments, though, come at a cost. At least four Iranian soldiers have been killed in one week. Iranian media have reported that more than 150 Guards died in more than a year of fighting in Syria.

Tehran has kept its army at home for decades and tried to keep conflict at bay through a strategy — manned and managed by the Guards — of fighting its regional rivals through proxies in Iraq, Syria and Lebanon. Syria is crucial to its success. It is on the ‘frontline’ with Israel and is an important bridge to Hezbollah, Iran’s Shia proxy force in Lebanon.

Iran has vowed that it will not compromise on the fate of Assad, and backs his offer to include opposition figures in a national unity government while ruling out a “transitional governing body with full executive powers” — the formula agreed at talks in Geneva in 2012.

In the meantime, the high casualty rate among Revolutionary Guards — whose “military advisers” are reckoned by a western diplomat in Tehran to number fewer than 10,000 — has prompted Tehran to deploy its regular army to bolster Assad’s forces in Syria.

The stakes are high for the Iranian regime as it again sent Qassem Soleimani, the notorious leader of its Quds Force, to Moscow again in violation of international travel bans restricting his movements to discuss with Russian military officials on the deteriorating situation in Syria and the delivery of nearly $8 billion of new weapons just purchased by Iran.

The delivery of new military hardware is viewed by Tehran as an important adjunct to the use of Hezbollah proxies, Quds Force fighters, Basiji paramilitaries and thousands of paid mercenary Afghans that the Iranian regime has been sending to Syria in a desperate bid to keep Assad in power.

According to the BBC, the first Afghan militias began to arrive in 2012 in Syria.

“The Iranian Revolutionary Guards Corps decided that the Syrian military could not succeed on their own,” one former Afghan fighter told the BBC. “The frontlines were too depleted and men were trying to avoid conscription.”

The Iranians decided to set up a 50,000-strong National Defense Force to fight alongside the Syrian army.

With a shortage of willing fighters inside Syria, they began looking elsewhere – signing up Iranian Afghans, Lebanese, Iraqi and Pakistani Shia recruits. The fact that the mullahs are now committing Iranian regular army units to the Syrian fight shows a significant leap in their desperation over the situation there.

Mrs. Maryam Rajavi, the leader of the National Council of Resistance of Iran, one of the leading Iranian dissident groups in the world, took note of these changes in an interview with Asharq Al-Awsat on Sunday in which she pointed out that the Iranian regime would collapse consequentially should Assad be toppled in Syria, which is why Iran’s regime has been trying to keep Assad in power at any cost.

“If Assad falls out of power in Damascus, then the Iranian regime will evidently follow and collapse in Tehran,” Mrs. Rajavi said.