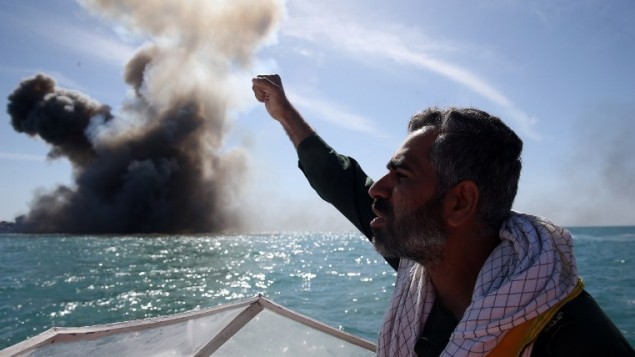 Iranian Regime Increases US Tensions Despite Promises by Iran Lobby

The Strait of Hormuz connects the Persian Gulf to the rest of the world and through it flows about 20 percent of the world’s petroleum supplies making it one of the most important trading routes in the world.

According to the U.S. Energy Information Administration, an average of 14 tankers per day transit the Strait carrying 17 million barrels of crude oil, representing a hefty 35 percent of the world’s seaborne shipments of oil. The vast majority of that oil, over 85 percent, goes to Asian markets such as Japan, China, India and South Korea.

It is a chokepoint that the Iranian regime has used as a threat to the rest of the world repeatedly since 1988 when it first laid mines in the Strait contrary to all international agreements. Iranian regime has been involved in a series of confrontations there, including:

The Iranian regime has used the threat of war and violence in the Strait as a form of diplomacy and regards such aggression as a tool of statecraft.

According to the New York Times, tensions between Iran and the United States, never far from the surface, showed signs of worsening on Wednesday, with the Iranians threatening to block a vital Persian Gulf access route and protesting what they called the American “meddling approach and tone.”

The Iranian regime messages, conveyed in statements by a commander of the Revolutionary Guards Corps and by the Foreign Ministry, came a few days after top mullah Ali Khamenei expressed exasperation with the U.S., questioning the longstanding deployment of the Navy’s Fifth Fleet in the Persian Gulf.

“It is Americans who should explain why they have come here from the other side of the world and stage war games,” Khamenei said in remarks widely reported in Iran’s state news media.

Together, the messages appeared to reflect a steady buildup of anti-American sentiment in Iran recently despite the nuclear agreement that took effect in January, which, on paper at least, eased the country’s economic isolation and was hailed by the Iran lobby as a force for moderation, which seems to have been a false promise so far.

The warning from the Revolutionary Guards about blocking American access to the Persian Gulf waterway appeared to be partly a response to a congressional resolution introduced April 28 by Representative J. Randy Forbes, Republican of Virginia.

The resolution condemned what it called Iran’s illegal detention of American sailors patrolling near Iran in January and said Iran had “undermined stability in the Arabian Gulf.”

On Wednesday, Iran’s Fars News Agency, which has links to the Revolutionary Guards, said Lt. Cmdr. Brig. Gen. Hossein Salami had issued a warning to the United States to avoid escalation.

“Iran will decisively confront any menacing passage through the Strait of Hormuz,” Fars quoted him as saying. “We warn the Americans not to repeat their past mistakes, and they should learn from historical realities.”

The aggressive statements made by regime officials underscore the de facto methodology employed by the mullahs in Tehran to state their case which is always by way of threat and coercion. The siren song promises made by Iran lobby supporters