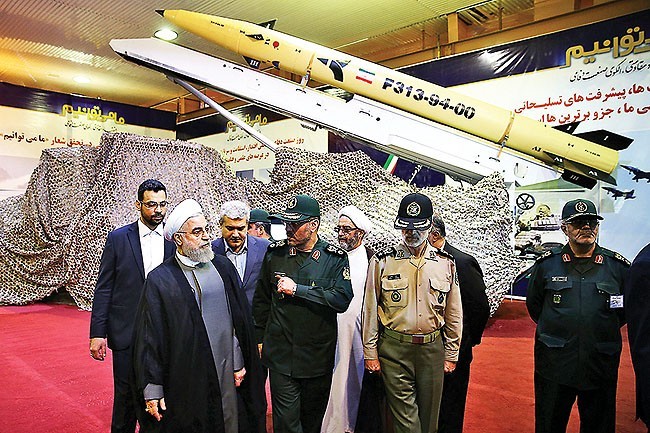 The United Nations Security Council Resolution 2231, which endorsed the proposed agreement with the regime on its nuclear weapons program, called on the regime not to undertake any activity related to ballistic missiles capable of delivering nuclear weapons.

It also contained an arms embargo against Iran for the next eight years, but since it is not part of the deal, the regime has said it won’t abide by with it.

“Can we be indifferent…when there are special circumstances on our eastern, western, northern and southern borders,” Rouhani said, apparently referring to fighting in Afghanistan, Iraq and elsewhere in the region. “How can a weak country unable to stand up to the military power of neighbors, rivals and enemies achieve peace?”

Of course Rouhani neglects to mention that Iran itself is responsible for the fighting going on around it with its support of the Syrian regime, Shiite militias in Iraq and Houthi rebels in Yemen, all of which have drawn in Turkey, Saudi Arabia, Gulf states, Jordan and Egypt into a much broader series of wars all started by Iran.

But the fact that Iran unveiled this new ballistic missile and ignored the UN resolution and recently completed the sale of S-300 advance anti-aircraft missile systems from the Russians, as well as violated travel sanctions in sending Quds Force commander Ghasem Soleimani on a secret mission to Moscow to shop for more arms, gives the world a rock-solid view of what the regime’s true intentions are; which is to rearm, reload and stock up on weapons as quickly as possible.

These actions, although deeply disturbing, are not what has the Iran lobby up in arms, which is the disclosure by the Associated Press and verified by Fox News of the contents of a secret side deal between the Iran regime and the International Atomic Energy Agency which purports to allow Iran to use its own inspectors at the contested Parchin military site to collect soil samples for testing without international monitors on site.

The agreement is startling and contemptuous of all of the previous “red lines” proposed by the P5+1 group of nations that negotiated with Iran and an example of the dramatic concessions granted to the regime in an attempt to appease the mullahs. The fact that the mullahs aren’t content with these windfalls and chose to unveil a new missile during the contentious debate over the deal in Congress gives us a strong idea of just what they think of the deal.

Which is why the Iran lobby is almost apoplectic about the disclosures since it represents a damning confirmation of how bad the deal is and how the mullahs have duped the Obama administration.

Joel B. Pollak writing in Breitbart discusses how these “Parchin truthers” have concocted some pretty ridiculous claims to try and hide the obvious in these Parchin disclosures.

The “Parchin truthers” include Trita Parsi, who heads the National Iranian-American Council (NIAC), a group often described as a pro-regime lobby. Parsi retweeted an accusation that the AP text may have been “personally forged by Benjamin Netanyahu,” and added his own comment,” Pollak said.

Tyler Cullis, also of the NIAC, went so far as to tweet that use of the phrase “Islamic State of Iran” had to be evidence of Netanyahu forging the statement since he’s the only one what uses that phrase. With all due respect to Cullis’ ham-handed efforts, there are plenty of us who refer to Iran as the “Islamic state”though they are really not Islamic and

The exposure of the Parchin lies of the Iran lobby have pushed the NIAC, Ploughshares Fund, J-Street and other regime supporters to attack not only the article itself, written by AP Vienna bureau chief George Jahn, but the global news organization itself in a desperate bid to deflect attention from the crippling revelations.

Joseph Cirincione, head of Ploughshares Fund which provides substantial funding for the NIAC and other Iran lobbying groups, took to the Los Angeles Times to trot out the well-worn and discredited idea that rejecting the proposed deal would inevitably lead to war.

He argues that U.S. partners would abandon the U.S. should the deal be rejected and the sanctions in place would fall apart as well. It is clear that what Cirincione is warning about has already happened because of the deal, not because of its defeat.

The mullahs are ignoring the arms embargo, acquiring weapons. They are hosting trade delegations from European nations and buying arms from the Russians, while lining up deals to sell oil to the Chinese in spite of the promise to keep sanctions in place unless and until Iranian regime demonstrates it has abided by the terms of the agreement to dismantle its nuclear program.

All of which proves how feckless the claims being made by Parsi, Cirincione and other regime sympathizers are and why the ballistic missiles Iran unveiled are only the start of a much more dangerous period in the Middle East and the world.