On the popular television show, “Who Wants to be a Millionaire,” one of the helpful aids for contestants is to use a “lifeline” and call a knowledgeable friend who can help answer a particularly difficult question.

For the Iranian regime, the annual United Nations General Assembly session in New York presented an opportunity to cast about and desperately try to find a lifeline in the face of a stuttering economy and economic sanctions being imposed by the Trump administration.

The appearances by President Donald Trump and Iranian president Hassan Rouhani at the UN podium punctuated vastly different views on the situation in Iran.

For President Trump’s part, he delivered a speech critical of the Iranian regime and the nuclear deal it received and the havoc it has wrecked on the regime since then.

For Rouhani, he predictably refuted those points and said U.S. withdrawal from the nuclear deal and re-imposition of economic sanctions would eventually be reversed.

The annual forum gave Rouhani the opportunity to try and resurrect the battered moderate image he had when he first addressed the session years ago amid much fanfare from the Iran lobby.

Since then he has presided over a regime that has helped a Syrian regime gas its own people, topple a government in Yemen, spark sectarian bloodshed in Iraq, funded terrorist activities around the world and abused the Iranian people to such a degree they are now openly chanting for an overthrow of the government.

“We do not wish to go to war with America anywhere in the region, we do not wish to attack them,” Rouhani told reporters in New York. “But we ask America to adhere to laws and respect the national sovereignty of nations.”

That last line would be hilariously funny if it wasn’t so cruelly absurd since Iran has not respected the sovereignty of its own neighbors in attempting to control Iraq, incite a rebellion in Yemen and conduct terror operations in Europe.

The contrast between reality and Rouhani’s statements were only highlighted even more as the Iran lobby pushed out the same narrative in an effort to rebuild the regime’s tattered image.

But the struggle the U.S. is trying to resolve is the unfinished business from the nuclear deal which is how to restrain Iran’s regional ambitions and destabilizing effect it has had throughout the Middle East.

The focus on Iran’s expansionist efforts and meddling in neighboring countries is an inconvenient truth that European leaders have tried to ignore even as Islamic terrorists inspired by Iran’s flaming rhetoric have attacked and killed innocents from Paris to Berlin to Nice.

The impact of American sanctions is having such a dramatic effect on the Iranian economy, as well as the mullahs’ tenuous hold on power that they have worked feverishly in an attempt to persuade Europe to build alternative economic lifelines to keep the regime afloat.

But a proposed plan by the European Union, Russia and China to sidestep U.S. sanctions on Iran by using an alternative payment system won’t give its oil buyers a free pass to handle Iranian crude.

Even if they used an alternative payment system incorporating bartering, envisioned in the proposal from the EU, Russia and China, any customers would still be vulnerable to secondary sanctions for simply buying the oil, according to Bloomberg.

The financing initiative was condemned by U.S. Secretary of Secretary Mike Pompeo at an anti-Iran event in New York on Tuesday. At the same gathering, National Security Adviser John Bolton said, “We do not intend to allow our sanctions to be evaded by Europe or anybody else.”

Bolton’s tough talk drew an unsurprising response from the National Iranian American Council which trotted out the tired refrain of war mongering.

“Bolton has called for the U.S. to bomb Iran for over a decade and is now in the driver’s seat of the Trump Administration’s foreign policy. His threats are aimed at inflaming tensions, preventing any possibility that his boss might negotiate with Iran, and goading Iran into to doing something that could justify a U.S. attack,” the NIAC said in a statement on its website.

The NIAC has been accusing the Trump administration of wanting to start a war with Iran in a blatant effort to divert attention away from the hard truth the administration is pressuring the world into seeing, which is Iran’s effect on the region and its harsh treatment of its own people.

The fact that the NIAC continues to trot out war fears is a reflection of how terrified the Iran lobby is the U.S. message of Iranian malfeasance might actually be gaining traction. At the very least the rest of the world cannot ignore the economic muscle of U.S. sanctions and is casting about for solutions to satisfy U.S. demands.

But while the Iran lobby has denounced U.S. actions, it has also cast aspersions on U.S. offers to engage in diplomacy to settle their differences with Iran.

At a meeting of the UN Security Council chaired by President Trump, he was quick to include a thanks for Iran, Syria and Russia to restrain a pending attack on Idlib and renewed his offer to meet with Rouhani.

Rouhani was quick to deny any such offer was extended and the Iran lobby ignored the president’s remarks; all of which was necessary because acknowledging either act would effectively box Iran in and show that it really doesn’t care about diplomacy and instead is only interested in finding alternative means to keep cash flowing into the faltering economy.

The reality is that the mullahs are increasingly growing desperate and running out of options, time and cash and caving U.S. demands to change how they behave might be the only way out. 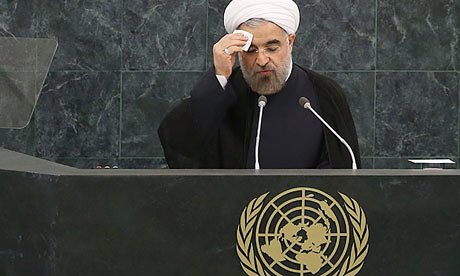