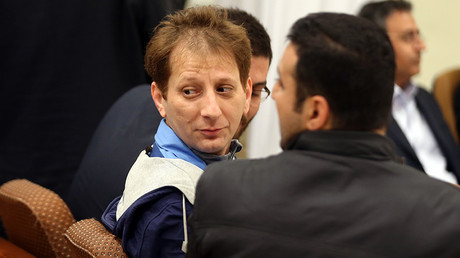 Being an Iranian Regime Friend Still Gets You Executed

You have to say this about the mullahs’ justice system in Iran; it sure hands out the death penalty swiftly.

An Iranian court has sentenced a well-known tycoon to death for corruption linked to oil sales during the rule of former President Mahmoud Ahmadinejad, a judiciary spokesman said Sunday.

Babak Zanjani and two of his associates were sentenced to death for “money laundering,” among other charges, Gholamhossein Mohseni Ejehi said in brief remarks broadcast on regime TV. He did not identify the two associates. Previous state media reports have said the three were charged with forgery and fraud.

“The court has recognized the three defendants as ‘corruptors on earth’ and sentenced them to death,” said Ejehi. “Corruptors on earth” is an Islamic term referring to crimes that are punishable by death because they have a major impact on society. The verdict, which came after a nearly five-month trial, can be appealed.

Zanjani is one of Iran’s wealthiest businessmen, with a fortune worth an estimated $14 billion, much of made from the illicit sale of petroleum in violation of economic sanctions imposed over Iran’s nuclear program, which ironically has been lifted because of the agreement reached last year.

Zanjani’s plight mirrors one of the peculiar aspects of the Iranian regime which is you are kept alive as long as you are useful to the regime and when your utility ceases, you often meet an ignominious end.

In Zanjani’s case, it was useful to the mullahs to have middlemen who could evade and skirt international sanctions to sell black market oil and steer the profits back into the regime’s coffers and the bank accounts of regime families and members of the Revolutionary Guard, but Zanjani also built a vast personal fortune from these acts and with the lifting of the economic sanctions and the opening of relations with the rest of the world, he ceased to be useful as a smuggler.

Now Zanjani and his associates can serve a more useful purpose by being examples of regime justice in combatting corruption that has been allowed to run rampant throughout all sectors of Iran’s economy and government. His sentencing permits Hassan Rouhani to project an image of justice and provides a convenient scapegoat as ordinary Iranians have chafed under severe economic hardship under mullahs.

Authorities said the death sentence could be reversed if Zanjani repays the pilfered proceeds. Zanjani’s lawyer has protested that a bank has refused to accept Zanjani’s offer of payments, according to reports from Tehran.

Zanjani has 20 days to appeal the sentence, authorities said.

Authorities here have prosecuted other instances of corruption, but death sentences in such cases are relatively rare.

The severity of the punishment suggests that the case is viewed in part as a warning to other entrepreneurs as Iran’s economy opens up in the post-sanctions era. Many investors here are anticipating a bonanza as international funds pour into the country.

Zanjani’s death sentence is stern reminder to eager entrepreneurs not to get out in front of the regime’s interests and remember the mullahs are very much still in charge.

It is also a harsh reminder that even though Western media lauded the “moderate” wins in Iran’s parliamentary elections, the apparatus of government, including the judiciary, is still firmly in control of the mullahs in dispensing medieval punishment.

“The political system in Iran’s a joke,” said U.S. Sen. Lindsey Graham (R-S.C.), adding that the significance of the moderates’ sweep in Tehran and other apparent wins across the country counts for “zero, zip.”

“There are no moderates in Iran,” Graham added. “That’s a fiction I don’t buy.”

“As long as the Ayatollah Khamenei is in charge, it doesn’t matter, the elections,” said Senate Armed Services Committee Chairman John McCain (R-Ariz.), another vocal opponent of the nuclear deal.

Iran has hardly acted like a saint since the deal was signed last July. The pact’s opponents are quick to point to recent ballistic missile tests and the detention of U.S. soldiers as part of the deal’s legacy.

“In many ways, the list of regime-approved candidates told us more about Iran’s intentions than the election results,” said Sen. Chris Coons (D-Del.), who called himself “deeply skeptical” that the moderates’ wins would bring about any progress.

Those views were shared in a scathing editorial by the Boston Herald, which said:

“This is a mistake. There is nothing moderate or reforming about Rouhani — or his new troops.

“These terms do not apply to a man who vigorously backs the Islamic Republic created in the 1979 revolution. He does not oppose his country’s support for Syrian dictator Bashar Assad, both with Iranian troops and those of its client the Hezbollah terrorist group.

“Rouhani has done nothing to reform a regime that holds hundreds of political — and religious — prisoners. The death penalty can still be given to homosexuals and adulterers. Amnesty International said last year Iran executed 694 prisoners in the six months ending last August, a startling bloodthirstiness that makes the rate of executions, in proportion to population, about 200 times what it is in the United States (where executions have been generally declining for 16 years).

“The candidates Rouhani endorsed included two former intelligence officials who murdered dissidents and another who called for the execution of leaders of the 2009 protests against a rigged election, said Jonathan Tobin of Commentary magazine.”

The Herald has joined the growing chorus of news media growing skeptical of any real reform coming out of Iran’s elections and has grown wary of the false promises offered up by Iran lobby supporters such as the National Iranian American Council in defense of election results.

We can only hope that skepticism spreads to the remaining presidential candidates on both sides of the aisle.